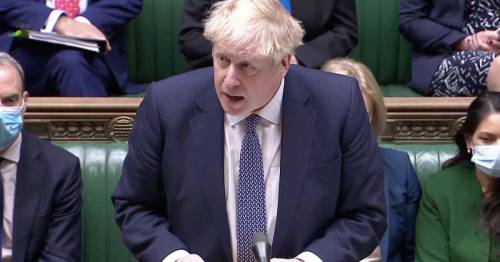 But a body language expert believes he has pinpointed the exact moment that Boris Johnson failed to connect with Brits at PMQs – leaving many viewers more furious than before.

Body language expert Bruce Durham, who is known as Believing Bruce, says that the PM delivered a 'cleverly constructed' speech that he'd hoped would incur forgiveness.

But it clearly didn't – with many reeling at his claim that he thought it was a work event.

Calls continue for him to resign following the May 2020 scandal which took place when the country was living under Covid curbs.

Bruce compared Boris's PMQ's speech to Prince Andrew's car crash interview with Emily Maitlis on Newsnight in which he claimed he was 'unable to sweat.

"It reminds me in many ways of the Prince Andrew BBC interview – they simply never really thought about the audience reaction, only about the person delivering the communication," the body language expert claims.

Mr Johnson said that he knew that the public was angry with him given the "extraordinary sacrifices" they had made.

He added: “I know the rage they feel with me, and with the government I lead, when they think that in Downing Street itself the rules were not being properly followed by the people who make the rules.”

Speaking to the Mirror, Bruce said he didn't think people accepted that the PM's remorse was genuine.

He said: "I went to watch his apology hoping to see some authenticity, some real emotion to perhaps quell the rage that is quite rightly sweeping across the UK at present.

"But instead of true empathy, authentic understanding and just a normal level of decency, what was presented was a cleverly constructed speech that was designed to make us feel something at the end."

"The desired impact was that, through the use of a ‘U shaped’ apology, at the end, we could remember exactly what he had said, but they hoped we would feel ‘happy’ about it.

The PM offered his "heartfelt apologies" over attending drinks

Looking at the apology, Bruce has delved into the world of psychology, of thoughts, feelings and triggers.

He said: "Boris starts his speech by saying he wants to offer an apology.

"This makes us feel good, it reduces our fight or flight reaction, we become more open as we have what we want.

"Our limbic system in the brain starts to fire less and our prefrontal cortex and other more logical areas start to take control. It’s an offering to calm us down.

"He then goes on to acknowledge about not being able to see loved ones (one of the biggest triggers the public are feeling right now) and we are still at the top of the U, feeling vindicated and more so, in control.

Bruce wasn't impressed by the apology

"This lasts around 37 seconds. A long enough time to anchor feel-good emotions to Boris."

But this is where things went wrong says Bruce, as he explains: "Then there is a trigger. This is when we start to descend, quickly, emotionally, frenetically into the pit of the bottom curve of the U.

"He begins to state that ‘although he cannot anticipate the conclusion of the findings..’ this is when we stop listening.

"Our Inner hulk is now being triggered. What he says vs what we are hearing is now getting skewed in an emotional furnace from all those who desire a true apology.

"He continues by saying 'Number 10 is a big department, with the garden as an extension of the office…’ – so he is now taking us down.

"This is where he wants to say something like he is admitting it, without actually admitting it.

"Our limbic system fires up, the thalamus, the hypothalamus, the amygdala goes into extreme overdrive, we become emotional as we can see, feel and hear what he is trying to do.

"He says he was out there for 25 minutes saying thank you to staff – this is another distraction technique.

"The fact that has stated that it was 25 minutes is a rather odd time to state and actually gets us thinking just that!

"But this is thrown in to get us thinking more about that, to confuse us so this negative part of the bottom of the U curve has less of an impact.

"He then starts to go back up the curve by stating that he wants to apologise, that ‘although technically within the law’ the British public would not see it like that, and that he could have done things better."

But this is where it's clear that the PM has got it "so wrong", explains Bruce.

He adds: "Instead of a U, he has created an L. His last words (approximately 30 seconds) did not bring us back to a happy place, they did not achieve the aim of calming us down again once the truth had been told.

"What he has done, either through his own pompous naivety or at the hands of an aide who clearly wrote the script for him, he has created more anger amongst the British public.

"So this leaves an already highly emotional public even more hormonally charged with enhanced negative feelings to an already beleaguered Prime Minister and a government that time and time again, simply have not followed the rules they set in law for millions of the public to obey."

Bruce Durham (BelievingBruce) has been training global corporate clients for over 20 years in body language analysis to create safer and higher performing teams. If you want to find out more information on Bruce, you can find him here at www.believingbruce.com