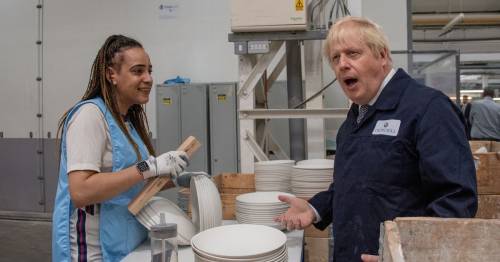 Boris Johnson has ordered ministers to axe up to 91,000 civil service jobs in a desperate bid to free up cash to tackle the cost of living crisis.

The Prime Minister is said to have told top Tories that the number of Whitehall officials should be cut by a fifth to bring the civil service to 2016 levels within a few years.

Unions blasted the move as a "reckless slash and burn" to public services and warned hard choices would be needed if the staffing levels are significantly reduced.

The Public and Commercial Services union (PCS) is to hold an emergency meeting of its executive committee next week to discuss its response, which could include strike action.

Labour said the Government had resisted calls for an emergency Budget and was instead focusing on "pointless rhetoric".

A senior official at HMRC apologised to staff on Friday, who found out about the planned job cuts through the media.

Jim Harra, Permanent Secretary at HMRC, told staff: "I am sorry that you have learned this from the media rather than from me or Civil Service leaders.

"The Cabinet Secretary and Head of the Civil Service, Simon Case, wrote to all Permanent Secretaries yesterday saying that the Prime Minister has asked for a plan to return Civil Service workforce numbers to 2016 levels over the next three years.

"This means reducing the current workforce by around 91,000 over that timeframe, from across all departments and arm's length bodies.

"The Civil Service must consider how we can streamline our workforce and equip ourselves with the skills to be an even more effective, lean and innovative service that continues to deliver for the people we serve."

The size of the civil service has swelled to around 475,000 since 2016, as officials were brought in to cope with challenges such as Brexit and the Covid pandemic.

Top Tory Jacob Rees-Mogg claimed that mass job cuts would not amount to a return to austerity, telling Sky News: "I don't think it is because what is being done is getting back to the efficiency levels we had in 2016."

He said a freeze on recruitment would help cut numbers, as some 38,000 people each year leave the civil service but each minister would be responsible for their own department.

The Brexit Opportunities minister suggested the move could save in the region £3.6 billion per year, with reports suggesting this could be put towards tax cuts.

But he faced questions about why he turned up for an interview with four advisors, with the Sky News presenter asking: "Do you perhaps detect an opportunity for some efficiency savings there?"

Mr Rees-Mogg said: "I cover a very wide area of public policy, but there should be efficiency throughout the civil service."

The minister has been embroiled in a war on Whitehall and was widely criticised for leaving passive aggressive notes on civil servants desks.

The paper note read: “Sorry you were out when I visited. I look forward to seeing you in the office very soon."

Dave Penman, general secretary of the FDA, a union for civil servants, said: "Unless they've got a serious plan, it's either another headline-grabbing stunt or a reckless slash-and-burn to public services without a thought or care about the consequences."

The Government is under huge pressure to help hard-up families struggling with the cost of living, as Brits face tax hikes, soaring energy bills, and rising inflation.

But the PM and Chancellor Rishi Sunak are resisting calls for a windfall tax on oil and gas giants to raise funds.

FDA general secretary Dave Penman said the expansion of Whitehall since 2016 was necessary to "deal with the consequences of two unprecedented events – Brexit and the Covid pandemic".

"To govern is to choose and ultimately this Government can decide to cut the civil service back to 2016 levels, but it will also then have to choose what the reduced civil service will no longer have the capacity to do. Will they affect passports, borders or health?" he said.

"Without an accompanying strategy, these cuts appear more like a continuation of the Government's civil service culture wars, or even worse, ill-thought out, rushed job slashes that won't lead to a more cost-effective government."

Mike Clancy, general secretary of the Prospect union said: "This proposal represents an outrageous act of vandalism on our public services.

"Through Brexit and then the pandemic we have never been more reliant in peace time on our civil service.

"Our members are highly skilled and there is a real risk to government delivery from losing their vital expertise.

"They are vital to what the Government want to do whether that is levelling up or pandemic recovery.

"For them these cuts to jobs come on the back of significant real terms cuts in pay.

"The big cuts to public services since 2010 have often proved an expensive error, these proposals risk doubling down on the mistake."

A Labour spokesman said: "Instead of implementing an emergency budget they have chosen to let down working people once again through pointless rhetoric and lack of action."

A Government spokeswoman said "the public rightly expect their Government to lead by example and run as efficiently as possible" as the nation faces rising costs.