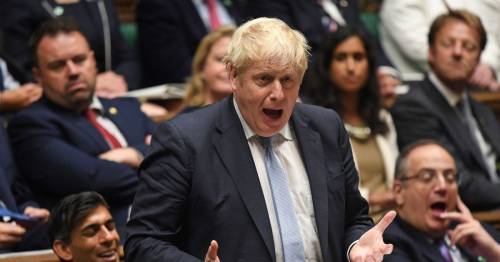 Boris Johnson's tax hike on Brits has passed its hurdle in the Commons despite uproar from furious Tory MPs.

The Health and Social Care Levy Bill breezed though the House on Tuesday evening after MPs gave it a third reading with 307 votes to 251, leaving a majority of 56.

Conservative MPs lined up to slap down the Prime Minister's manifesto breaking bill which hits Brits who earn over £9,568 a year with a 1.25% National Insurance hike.

The tax rise will affect both employers and employees across the UK in April 2022 to raise £12bn a year for both health and care.

The Prime Minister is trying to ram the bill through Parliament in a single day and it has passed its second reading with 317 votes to 256, a majority of 61 votes.

And 41 Tories abstained from voting which could be because they oppose the tax hike or for other reasons for being unable to make the vote.

Steve Barclay, Chief Secretary to the Treasury insists the health and social care tax will enable the NHS to recover from the pandemic.

He told the Commons ahead of the vote: "Senior NHS leaders have made clear that without additional financial support we will not properly be able to address the significant backlog in the National Health Service.

“But to get everyone the care they need, it is going to take time. In addition, our social care plan will create a dramatically expanded safety net for people in their later life."

Labour raised concerns over the lack of a social care plan and warned the Bill broke the Government’s promise not to increase National Insurance.

Keir Starmer has been under immense pressure to explain how Labour would fund the £12 billion-a-year increase in health and social care spending which the Government initially announced last week.

In the Commons Shadow Treasury minister James Murray blasted the Tories for only giving the bill a “few hours” of scrutiny in Parliament.

He said the Government is avoiding “giving their own side enough time to push back”.

He added: “If we are going to take £12 billion a year out of people’s pockets, then we need to avoid falling into three traps.”

His backing was echoed by Tory MP John Baron who added: “We need to give you credit where it’s due. The Government is absolutely right to try to grasp this nettle."

But they were drowned out by Tory rebels who slammed the bill.

Tory backbencher Craig Mackinlay said: "My sadness is we are just reaching for the tax lever. That’s not what Conservatives do. We are going to end up with a tax take at the highest level of GDP for 70 years.

“We tend to tax things that are deemed to be bad. We tax things like alcohol and cigarettes and fuel because we want to have lower use of them. They are deemed bad. So, increasing a tax on jobs, something we want a lot of, seems to be rather bizarre.”

Tory MP for South Dorset Richard Drax urged the Government to lower taxes, as he told the Commons: “A radical review of health provision is critical if we are not to pour money into a black hole.

"We heard this expression repeatedly today, it is a bottomless pit. Without reform, this money, well intended by the Government, will disappear."

Former Tory minister John Redwood warned the National Insurance rise was not the right thing to do, saying: “Don’t kill the recovery and you’ll get the money.”

Mr Redwood added: “This is too soon, Government, to start breaking the economy.

"The growth rate almost disappeared in the last month. I am hoping it is going to look a bit better in the next month or two when we get more opening up."

Another Tory rebel John Baron MP for Basildon and Billericay said he could not support the Bill given it will “cost jobs” while also lowering pay and resulting in higher prices.

Previous : Mum finally reunited with daughter, 19, after she was abducted 13 years ago
Next : Boris Johnson mum’s ‘ghastly’ marriage to TV star Stanley who she claimed hit her