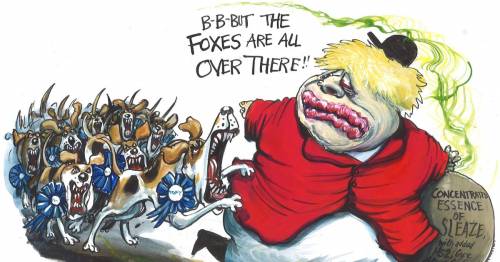 All political careers end in failure if few as spectacularly as Boris Johnson’s.

Tory hounds turning on their onetime master, brutally savaging a pursued Prime Minister running for his life, is the beginning of the end.

Few predict with real conviction exactly when he’ll be gone.

Some talk in Westminster about next year. Others 2023 if electoral prospects still look glum. Everybody soon after the next election, win or lose.

The change in the Tory mood is palpable, political obituaries being mentally written for a kamikaze leader who in a fortnight crystallised every fear about judgement, trust and suitability.

Boris Johnson not wearing a mask in hospital
(

It was rare before to find a Tory MP who respected Johnson.

The majority held their noses and tolerated him because connecting with a 43.6% minority of the voting country was sufficient to deliver an 80-seat Parliamentary majority and power. Not any more.

As is the expensive, shelf-emptying bad Brexit deal Johnson delivered as his flagship policy when it’s the opposite of the promised riches.

Slapdash Johnson’s inflated Boosterism is no longer a selling point when it suddenly shines an unforgiving light on his lies, incompetence and broken promises.

Because the mask has well and truly slipped outside as well as inside hospitals.

History will judge him harshly
(

He won’t recover credibility with the punished, let down and betrayed – particularly as he squeezes their living standards.

Conned, decent folk don’t like the ugliness they see. Tory MPs know that. The nation increasingly knows it.

That’s his style, selfish to the bitter end.

History will judge him harshly. Deservedly so for damaging Britain long after he’s gone.