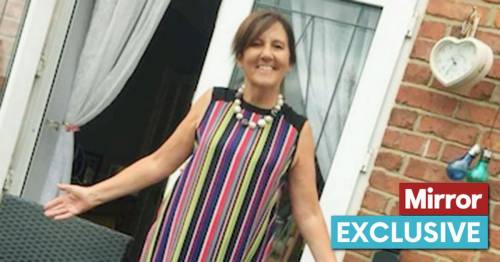 Boris Johnson ’s lies are a “disgraceful insult to all the families who have suffered” a grieving daughter told The Mirror.

Simone Casey, 37, from Stockton-on-Tees, told how her family were “ripped apart” after their mum, Susan Casey, died of Covid last November aged 60.

“She spent four weeks alone and petrified in hospital and was sending us messages desperate for us to visit her.

The terrified mum-of-three pleaded with her family: “I wish I could have visitors,” Please, I want to live” and “I’m afraid they will give up on me.”

Susan found out she had Covid on her 60th birthday on October 26, the day she was due to get her booster jab and died a month later on November 30.

“My mum was petrified but we could not be there to hold her hand,” Simone told The Mirror.

“ Boris Johnson 's lies are an insult to all the families who have suffered.

“I don’t even think he should be given the right to resign, his party should be stepping in and taking that privilege away from him,” she said.

“I wish I could sit Boris down and tell him how following the rules ripped our family apart. I wish we had been there to hold her hand at the end.

“The apology today is not genuine at all. It’s just more lies saying he thought it was a work event and an extended room from 10 Downing Street, it is clearly a garden party. It’s like he’s above the law.”

Reacting to the PM’s apology, she said: “I think he is absolutely disgusting and he needs to do the right thing and resign but he needs to be prosecuted too.

“It was such an insincere apology and a real kick in the teeth. He needs to go.

“I was shouting at the television because I felt so enraged at it all. Keir Starmer was amazing. He said everything to Boris Johnson that I wanted to say. He called him out.

“But I could not believe the other Tory MPs were bringing up issues about washing machines. It was completely inappropriate.”

Dr Saleyha Ahsan lost her father to Covid during the pandemic
(

NHS doctor, Dr Saleyha Ahsan, 50, who lost her father to Covid in the pandemic and who formerly worked at a hospital in Bangor where she sweated in PPE looking after patients, said of his apology: “I think it was weak. I think it was poor. It didn’t take ownership.

“It did fall far below what he should have done, which is put his hands up, admit what he’d done, admit that he’s a liability.

“And I think fair enough that his situation now as Prime Minister is untenable.”

Alejandra Godoy – who lost her mother in May 2020 – told the BBC : “I really hate him, I’m sorry to say it because my mum would not want me to say that. He’s just a disgrace…he lies and lies and lies.”

Breaking down in tears, Lisa Wilkie, whose brother died in May 2020, told how she filmed him dying in intensive care, because her mother wasn’t allowed to attend.

“Instead of holding my mum, I was holding my phone filming my brother dying. People died sticking to the rules and they broke those rules to have a bottle of wine,” she said.

Previous : Pensioner with dementia died choking on doughnut given to her by untrained staff
Next : Shameless scammers caught advertising fake flat to hopeful renters around the world – World News