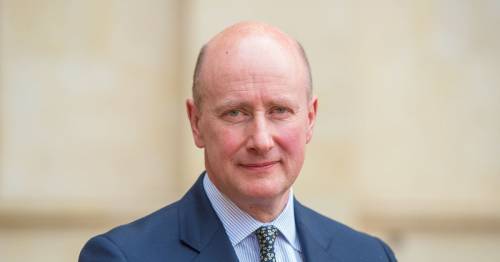 In a move that could derail the Prime Minister’s bid to reset his premiership, the usually wordy peer released a terse, 21-word statement simply saying it was “right” for him to quit.

It puts Mr Johnson in fresh danger, with two by-elections looming next week – and the Privileges Committee's investigation into whether he lied about Downing Street parties.

Top Tories had been hopeful Mr Johnson could survive as PM if he managed to brush aside internal party rows for the next fortnight.

A senior Number 10 source said: "We are all surprised, this is a mystery to the PM. Only on Monday Lord Geidt indicated to the PM he would like to stay on for another six months."

In his statement, Lord Geidt wrote: "With regret, I feel that it is right that I am resigning from my post as Independent Adviser on Ministers’ Interests."Lord Geidt had repeatedly clashed with the PM – first over the investigation into the funding of the refurbishment of the Downing Street flat.

After clearing the PM of blame for the row, it later emerged key evidence had been kept from Lord Geidt's probe – which he said had shown "insufficient regard or respect" for his role.

And he publicly clashed with the PM over whether his attendance at Downing Street parties amounted to a breach of the ministerial code.

And Labour's Deputy Leader Angela Rayner said: “The Prime Minister has now driven both of his own hand picked ethics advisers to resign in despair. If even they can’t defend his conduct in office, how can anyone believe he is fit to govern?

“Yet he remains propped up in office by a Conservative party that is mired in sleaze and totally unable to tackle the cost of living crisis facing the British people.

“The person who should be leaving Number Ten tonight is Boris Johnson himself. Just how long does the country have to wait before Tory MPs finally do the right thing?”

Sources told the Mirror last month Lord Geidt had considered quitting over Mr Johnson blocking his bid for more powers and the independence to launch his own investigations.

But after spending “all day trying to talk him round”, No10 insiders convinced him to stay.

Despite claiming the confrontation had led to more independence, the new rules for Lord Geidt’s position still required him to seek the permission of the PM before launching a probe into misbehaving ministers.

Lord Geidt’s departure comes just days after he struggled to defend his role under scrutiny from MPs.

Accused of being “little more than a tin of white wash” by Labour’s John McDonnell, Lord Geidt told a Commons Committee on Tuesday: “How can I defeat the impression that it’s a cosy, insufficiently independent relationship? It’s very hard.”

He said he discharged his duties as best he could, despite it being in “a slightly brighter glare of publicity than is usually comfortable.”

Asked directly whether there was “really any point” to his role, Lord Geidt said it was “just a statement of fact” that Mr Johnson had “potentially been within the scope of the [Ministerial] Code for quite a lot of the period I’ve been in position” – and that this had “created its own pressures.”

Lord Geidt said it was "reasonable" to suggest the Prime Minister being fined over Partygate could be a breach of the ministerial code.

And he said he had felt "frustrated” over the PM’s behaviour, and that the option of resignation was always "on the agenda".

He said. "Resignation is one of the blunt but few tools available to the adviser. I am glad that my frustrations were addressed in the way that they were."

He becomes is the second ethics advisor to Boris Johnson who has resigned in protest since he became Prime Minister.

The first, Sir Alex Allan, quit in November 2020 after the Tory leader overruled his decision that Priti Patel broke the Ministerial Code.

Sir Alex found the Home Secretary "shouted and swore" at staff in behaviour "that can be described as bullying".

But Boris Johnson overruled him, during Anti-Bullying Week, to rule that in his view Ms Patel had not broken the code.

Previous : Labour’s Dawn Butler ‘threatened with police escort’ after calling Boris Johnson a liar in Commons
Next : Loved-up couples will soon be able to order a wedding cake inspired by fried chicken on Uber Eats