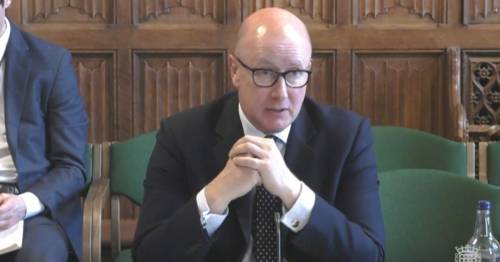 Boris Johnson has now lost two of his Independent Advisors on Ministerial Interests in less than two years.

The plummy-voiced former Private Secretary to the Queen was responsible for enforcing the Ministerial Code – including against the Prime Minister.

But he had his attempts to get more power and independence to investigate ministers – including the PM – blocked by the PM.

After weeks of weighing up whether to resign, the final straw appeared to be a Parliamentary hearing yesterday, where he admitted: “How can I defeat the impression that it’s a cosy, insufficiently independent relationship?

“It’s very hard. But I’m trying my best to work with what I’ve got.”

The announcement plunges Boris Johnson into fresh turmoil just when he was attempting to move on from Partygate.

In a terse 21-word statement, Lord Geidt did not actually give his reasons for resigning – so it’s left to us to speculate. But it’s not too hard.

We look at some of the factors that appear to surround him quitting – as well as outlining why the PM’s last ethics advisor left in 2020.

Did Partygate break the Ministerial Code?

On May 31 Lord Geidt warned there was a “legitimate question” about whether the PM’s Partygate fine may have broken the Ministerial Code.

Lord Geidt said he had urged the Prime Minister to publicly explain why he thought incurring a fine would not be in breach of the code of conduct.

But he added: "That advice has not been heeded."

The peer added Boris Johnson was making it “difficult to inspire trust” in the Ministerial Code by refusing to refer to it over his £50 fine.

Lord Geidt wrote: "Whether unfairly or not, an impression has developed that the Prime Minister may be unwilling to have his own conduct judged against the Code’s obligations.”

Boris Johnson was fined by the police over Partygate
(

Lord Geidt suggested he had his work cut out in less than two years as ethics advisor.

He told MPs it was “just a statement of fact” that Mr Johnson had “potentially been within the scope of the [Ministerial] Code for quite a lot of the period I’ve been in position”.

This had “created its own pressures”, the ethics chief added, mysteriously. Some of these are clear…

Lord Geidt had asked for the power to start his own investigations, without the PM's permission, in the wake of the Downing Street flat row (below!).

This would have avoided the Prime Minister being able to prevent his ethics watchdog from investigating him.

The peer said the power he was asking for “has been called for over many years” and the changes proposed were “at a low level of ambition.”

Row over the Downing Street flat

A furious letter from Lord Geidt to the PM in January revealed explosive new text messages in the row over the Downing Street flat refurb.

The 'missing' messages reveal Mr Johnson had declared his luxury flat above Number 11 "a bit of a tip”.

At the same time, the PM promised he would consider the donor’s plan for a second “Great Exhibition” – the so-called ‘wallpaper for festivals’ row.

In a scorching letter, Lord Geidt said the failure to provide him with the texts was “plainly unsatisfactory", demonstrated "insufficient respect" and presented a "threat to public confidence" in his job.

While he did not say the texts were a smoking gun proving Mr Johnson broke the rules, Lord Geidt said his report into the scandal would have been different if he’d known about them in the first place.

The PM was reported to have further enflamed tensions with Lord Geidt after he watered down the ministerial code and blocked a bid to give his ethics advisor the power to investigate him.

Just days after Sue Gray report slammed No10’s leadership for the “culture” that led to Partygate, the Prime Minister issued a new version of the rules for ministers – allowing ministers to break the rules without resigning.

Mr Johnson pointedly dismissed calls from Lord Geidt, who had asked for the power to launch investigations into behaviour independently in the wake of the Downing Street flat row.

In his introduction to the previous edition of the ministerial code, the Prime Minister said ministers must "uphold the very highest standards of propriety" – words that were removed from the revamped edition.

The new introduction said the code should "guide my ministers on how they should act and arrange their affairs".

And the foreword no longer explicitly mentioned the seven Nolan principles of public life – integrity, objectivity, accountability, transparency, honesty and leadership in the public interest.

In 2020, an official report found Home Secretary Priti Patel "shouted and swore" at staff in behaviour "that can be described as bullying".

The move allowed Ms Patel to keep her job as the PM ordered Tory MPs to rally round her, telling a WhatsApp group: "Time to form a square around the prittster".

This led to the bombshell resignation of Sir Alex.

Sir Alex Allan said in a statement: “I recognise that it is for the Prime Minister to make a judgment on whether actions by a minister amount to a breach of the ministerial code.

“But I feel that it is right that I should now resign from my position as the Prime Minister’s independent adviser on the code.”

The resignation of a second ethics advisor over the PM's conduct will spark new scrutiny of Mr Johnson's character.

Why is this so dangerous for Boris Johnson?

It means the Partygate scandal is not over and the Prime Minister's authority faces a new threat.

Having narrowly survived an attempt by backbench Tory MPs to oust him last week – a staggering 148 MPs voted to express no confidence in his leadership – the PM has been pushing so-called "wedge issues" in a bid to bounce his rule-breaking off the agenda.

The cruel and hated Rwanda deportation policy, inflaming rows with trade unions over strikes over pay and a dramatic reshaping of the civil service will now take a back seat to Lord Geidt's dramatic resignation.

Fresh questions will be asked about what pushed the sleaze watchdog to finally quit – and whether the Prime Minister is fit to lead.

Meanwhile, Mr Johnson is braced for another investigation, this time by the Commons' privileges committee over whether he willingly and knowingly lied to Parliament when he told MPs there were no illegal parties and no Covid rules were broken.

Lord Geidt may be asked to give evidence detailing his conversations with the PM.

The ministerial code, of which Boris Johnson remains the ultimate arbiter, makes clear that ministers of state who knowingly mislead parliament will be expected to offer their resignation.

The embattled PM may desperately want to cling on.

But with him and his party languishing in the polls, with two tricky by-elections on the horizon and a huge chunk of his parliamentary party already against him, Mr Johnson is running out of road.

Previous : Max Verstappen to get F1 title race boost with grid penalty looming for Charles Leclerc
Next : Tory MP told ‘I hope you get cancer and suffer in agony’ in ‘sick’ abusive email