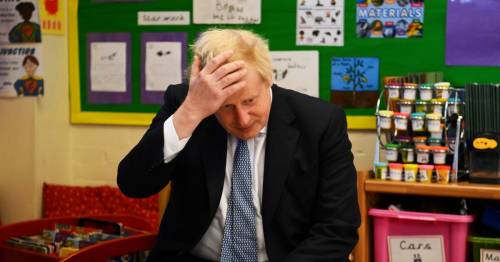 Boris Johnson would be stripped of his Commons majority and lose nearly 90 seats at a general election if local election results were replicated.

The Prime Minister is facing Tory anger after shedding hundreds of councillors in a dire night at the polls.

Analysis of the local election results by Sky News suggested the Tories would be 48 seats short of an overall majority – and only seven seats ahead of Labour – in a national poll.

Elections expert Professor Michael Thrasher explained the findings were based on results from 1,700 wards and an analysis of change in vote share since 2018 across 87 local authorities.

The research suggests the Conservatives would have 278 seats, while Labour would seize 271, the SNP would have 50, the Liberal Democrats 28 and 23 would be held by other candidates.

Prof Thrasher explained that Labour needed a swing of just 3.2% to rob the Conservatives of their Commons majority.

But he added: "They need a really big swing to gain an overall majority and they simply aren't anywhere near.

"So that's why we get to a hung Parliament with the Tories just seven seats ahead of Labour."

It comes as Mr Johnson admitted the Tories had endured a "tough night" at the polls as millions of voters turned out to elect local councils across England, Scotland and Wales.

Labour ousted the Tories in key London strongholds of Westminster, Wandsworth and Barnet while the PM faced grassroots anger as dozens of Conservative councillors lost their seats.

But Keir Starmer was dealt a blow when Durham Police confirmed it was investigating allegations of Covid rule breaches after footage emerged of him having beer and a takeaway with Labour campaigners ahead of a b-election in April 2021.

The Liberal Democrats were buoyed by a string of gains in the Blue Wall of southern Tory heartlands, and seized Hull from Labour.

Leading pollster Professor Sir John Curtice said Labour had opened up the biggest lead over the Tories in any local elections for a decade.

Prof Curtice calculated that if the whole country had been voting in the elections on Thursday, Labour would have gained 35% of the vote – five points ahead of the Conservatives on 30%.

In an analysis for the BBC based on voting in more than 700 key wards, he said the Liberal Democrats would have gained 19%, with other parties on 16%.

Labour's result matches what it achieved in the 2018 local elections – Jeremy Corbyn's best set of results – but marked a six-point improvement on its performance in the last local polls, he said.

Prof Curtice said its five-point lead over the Conservatives is the largest in any local elections since 2012, while the Tory vote share was down five points on 2018 and six points on last year.

With the exception of the 2019 local elections – when the party was riven by Brexit divisions – he said it represented the Tories' worst performance in a local election since before the EU referendum.

The Lib Dem result matched what the party achieved in the 2019 locals, which was its best performance in any local election since it entered coalition with the Conservatives in 2010.

Previous : Meghan Markle wipes all references to show dumped by Netflix
Next : ‘Starmer knows more needs to be done to win back voters in former Labour heartlands’ – Voice of the Mirror