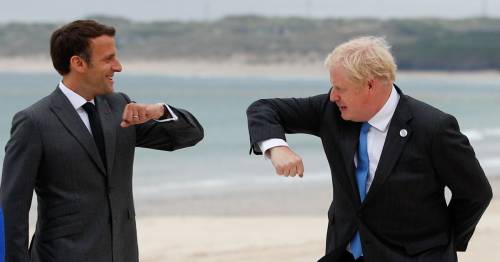 The world's most powerful leaders elbow-bumped Boris and Carrie Johnson on the beach today as they descended on the G7 summit.

The Prime Minister and his new wife opened the three-day get-together in Carbis Bay, Cornwall – where the elite and their spouses sauntered down a long boardwalk onto the beach.

The Tory leader at first kept his cool on the world stage – before then descending into a rambling welcome for his fellow leaders a few moments later.

"So those are some of the objectives we have before us at Carbis Bay." 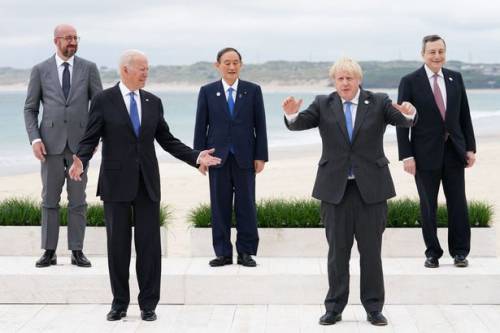 Earlier Mr and Mrs Johnson were all smiles as they leaped in to elbow bump the world's powerful and posed for a 'family photo' on the makeshift runway.

France's Emmanuel Macron made a beeline for US President Joe Biden after the photo.

The two Presidents briefly abandoned social distancing and walked arm in arm after each of their countries gave Boris Johnson a warning over rising tensions in Northern Ireland. 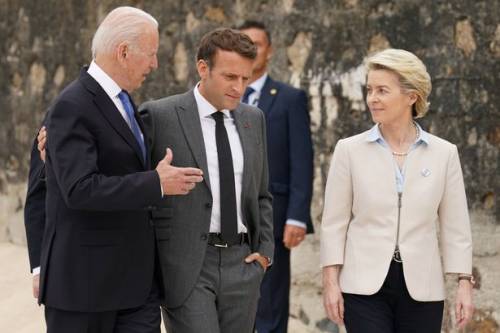 But Canada's Justin Trudeau was more careful – masking up for five brief seconds during his elbow-bump with the UK Prime Minister.

The world leaders gathered in a jolly atmosphere for their in-person summit.

After the photograph, German Chancellor Angela Merkel urged the PM to guide them to the room for talks. “You are the leader,” she told him.

But amid high security and Covid tests, there were dark clouds on the horizon – and not just those producing the Cornish 'mizzle'. 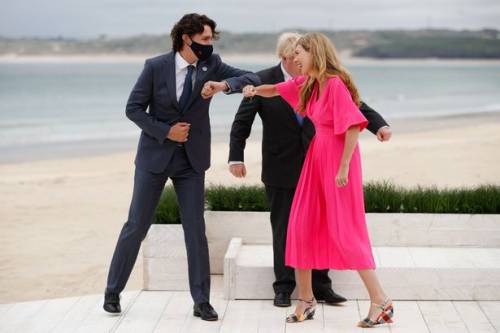 Macron had already warned Boris Johnson not to extend grace periods for meat trade between Britain and Northern Ireland, which will be restricted thanks to his own Brexit deal.

And the EU chiefs Ursula von der Leyen and Charles Michel both look set to raise the issue in meetings with the PM this weekend.

The UK is hosting the summit at Cardis Bay as nations look beyond the Covid pandemic to other looming challenges, such as the vaccine rollout in developing climate change, the Brexit fallout and trade with China. 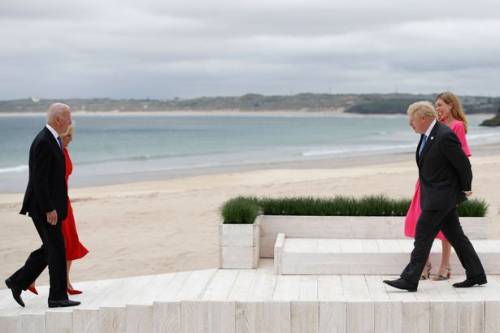 The Prime Minister ordered around counterparts for their Kodak moments, showing French President Emmanuel Macron where to stand on the timber stage.

“Emmanuel, there!” barked the British premier.

Later, as the leaders stood for their “family photo”, the PM – who as a child dreamt of being “world king” – told them: “Everybody! Thanks very much. How's that?”

Once the shutters finished clicking, Mr Biden joked: “Everybody in the water!”

His wife Jill: said “I feel like we are at a wedding.”

The thrice-married PM quipped it was like walking down the aisle. 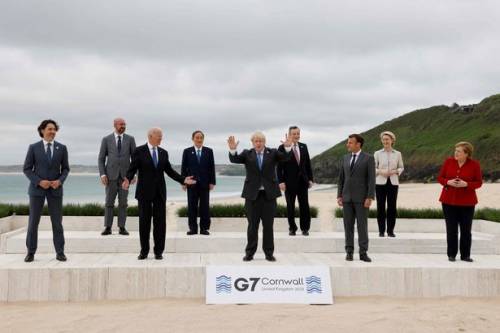 But the bonhomie remains on a diplomatic knife edge as the PM prepares for talks European leaders as the standoff over Brexit trading rules deepens.

The PM accused the EU of an "excessively burdensome" approach to post-Brexit trading arrangements.

Mr Johnson, who signed the divorce deal which included the Protocol, insisted he was not trying to back out of the agreement. 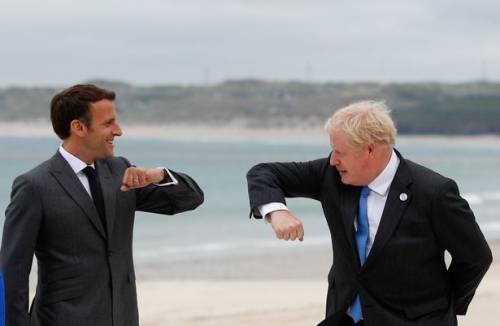 But he warned the UK's "internal market" had to be respected and "we just need to make it work".

The EU has threatened to launch a trade war against Britain if it fails to implement checks on goods entering Northern Ireland under the terms of the settlement.

A "sausage war" trade dispute looms after the UK refused to rule out delaying imposing checks on British-made chilled meats. 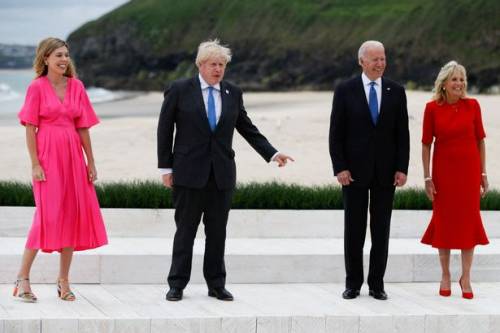 The President shared jokes about walking down the aisle with the Prime Minister
(Image: POOL/AFP via Getty Images)

Checks are due to come into force at the end of this month.

He added: “I believe in the strength of treaties, I believe in serious work, nothing is renegotiable, everything is applicable…. It has been painfully discussed for years, and discussed, let me remind you, on the initiative of the British who decided to leave." 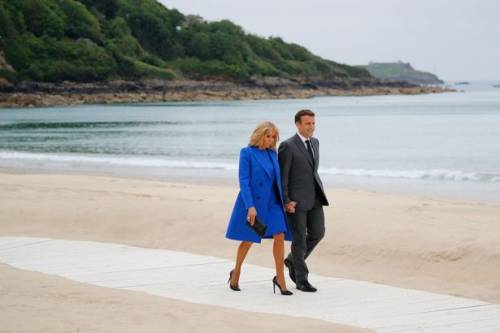 Emmanuel Macron arrived on the boardwalk with his wife Brigitte
(Image: POOL/AFP via Getty Images)

Later the Queen will take centre stage in Cornwall as she attends a reception for G7 leaders including US President Joe Biden.

The monarch is due to join a lavish drinks bash at the spectacular Eden Project along with Prince Charles, the Duchess of Cornwall, Prince William and the Duchess of Cambridge, before the royals depart and leave the political leaders to dine.

Mr Biden will also have time with the Queen at Windsor Castle on Sunday.

Guests at the Eden banquet will feast on locally-caught roasted turbot and new potatoes. 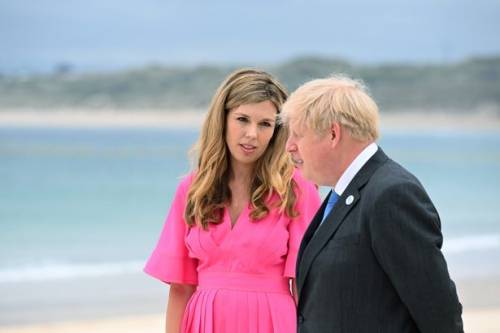 Carrie Johnson having a word with her new husband
(Image: REUTERS)

Mr Johnson said in his introduction it was "wonderful to see everyone in person. I can't tell you what a difference it makes. We have all been going thought the most wretched pandemic our countries have faced for our lifetimes, maybe longer, much longer.

"I actually think this is a meeting that genuinely needs to happen, because we need to make sure we learn the lessons of the pandemic.

"And I think they have the potential to bounce back very strongly and there's all sorts of reasons for being very optimistic.

"But it is vital that we don't repeat the mistake of the last great crisis, the last great economic recession in 2008 when the recovery was not uniform across all parts of society, and I think what's gone wrong with this pandemic or what risks being a lasting scar is that I think the inequalities may be entrenched and we need to make sure that as we recover we level up across our societies and we build back better.

"And I actually think we have a huge opportunity to do that because, as G7, we are united in our vision for a cleaner, greener world, a solution to the problems of climate change and in those ideas, those technologies, in which we are all addressing together, there is the potential to generate many, many millions of high-wage, high-skill jobs.

"And I think that is now what the people of our countries want us to focus on."

Previous : Campaigners slam UK’s ‘shameful’ vaccine donations as only a quarter due by Christmas
Next : Facebook says remote working move could slow jobs growth in Ireland