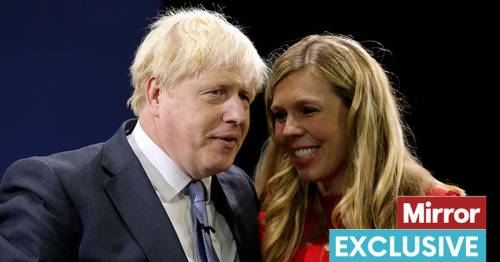 The Prime Minister is said to have raised possible new environmental roles for her in autumn 2020, either on the COP 26 summit or with the Royal Family.

It follows allegations he tried to make her his £100,000-a-year chief of staff two years earlier, when he was Foreign Secretary and she was his girlfriend.

Now sources say the PM wanted to get her a job as a green ambassador in the run-up to the global climate summit in Glasgow. They claim his second idea was to line her up as communications director for the Duke and Duchess of Cambridge’s Earthshot Prize.

The insiders suggest he wanted Cabinet Secretary Simon Case, who had previously been Prince William’s private secretary, to “take soundings”.

But the PM’s closest advisers were said to have vetoed both suggestions, warning either position could undermine his wife’s status as a private citizen.

Mr Case is not believed to have had a conversation about the Earthshot role with the Palace and no formal request was made to COP organisers.

Mrs Johnson was on maternity leave at the time from conservation charity Oceana, after having first child Wilf.

There is no suggestion she knew of the PM’s alleged conversations. She was said to have been in private talks at the time about joining the Aspinall Foundation, her current employer. Sources suggested her husband was not necessarily looking for a paid role for her but “something to keep her busy”.

One source said: "He has form in finding convenient cubby holes for his women".

No10 said: “The PM has never recommended Mrs Johnson for a government role or one as part of the Earthshot Prize.” But it did not deny the claim that he discussed the matter with Downing Street aides.

Pressed on the issue, the Prime Minister's official spokesman said: "The Prime Minister has never recommended Mrs Johnson for a Government role, or one as part of the Earthshot Prize.

"Beyond that I wouldn't get into any conversations the Prime Minister may or may not have had in private."

The PM’s former top adviser Dominic Cummings has also alleged Mr Johnson wanted to appoint his wife to a Government job in late 2020. A spokesman for Mrs Johnson said: “This is an old story, as untrue now as it was then.”

Just hours after The Times published the claim about the Foreign Office job – first reported in a biography by Tory donor Lord Ashcroft – the story was mysteriously pulled.

The PM’s official spokesman pointed to earlier denials by a spokesman for Mrs Johnson. However, three sources have told the Mirror the PM was keen on the idea for months in 2018.

Former Foreign Office minister Alan Duncan also mentioned in his diaries claims the then Carrie Symonds was being lined up as a special adviser.