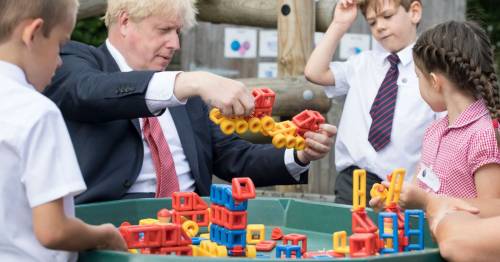 Boris Johnson has been branded “out of touch” after suggesting rich parents can buy private tuition because they “work hard.”

The Prime Minister twice defended well-to-do families who use private tutors to give their children a leg up, as millions of pupils struggle to recover from months of lost learning due to Covid-19.

And he said his cut-price catch-up plan – which costs a tenth of what his own education recovery advisor recommended – was aimed at helping “the other kids.”

Mr Johnson has spent hundreds of thousands of pounds having his own children educated at costly private schools – at a cost of up to £33,000 a year – more than the UK average annual salary.

And he has previously admitted to the Mirror that he might not be Prime Minister had it not been for his own eye-wateringly expensive education.

Do you think not being able to afford private tuition means you don't 'work hard' enough? Tell us in the comments below

“The PM was simply making clear that he wants to make sure that this is available to all children who need the extra tuition, and that's why we set out the package that we set out last week,” the spokesman said.

But Keir Starmer ’s spokesman branded the PM “out of touch”.

He said: “The PM's comments show how out of touch he is with parents and teachers across the country.

“If the PM was serious about improving children's education he'd stump up the cash to invest in children's futures.

“Instead he allowed the Chancellor to block proposals and is failing to do what is in the best interests of children's futures.”

At Prime Minister’s Questions, Mr Johnson said: “Hitherto what has happened is that the kids of well-off parents, thanks to their hard work, have been able to rely on private tutoring.

“What the Government is now doing is coming in on the side of all the other kids who don't get access to that.”

Kier Starmer responded: “How can he be on the side of the other kids? Come off it.

"The Prime Minister's been all over the place when it comes to education and he's on the wrong side of it again."

Previous : Boris Johnson moans Tories are spouting ‘lefty propaganda’ by fighting his cuts for the poor
Next : Covid super variants could lead to ‘2020 all over again’, scientists and doctors say