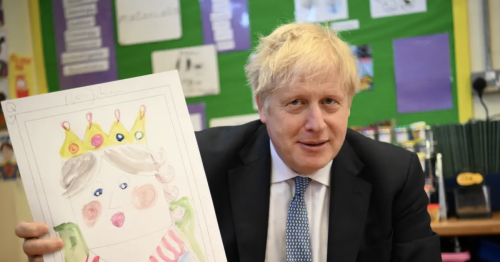 Boris Johnson has admitted the Tories had a "tough night" at the local elections after Labour ousted them in key Tory strongholds.

Speaking during a visit to a school in his Uxbridge and South Ruislip constituency said the town hall vote was a "mixed set of results" for the Conservatives.

The Lib Dems picked up victories in Tory strongholds, including in Oxfordshire, while Labour took the long-standing Tory councils of Barnet, Westminster and Wandsworth in London.

As dozens of Tory councillors lost their seats against a backdrop of the row about lockdown-busting parties in No 10 and the cost-of-living crisis, calls have been growing for the Tory leader to consider stepping down.

Boris Johnson at a school in his constituency

Mr Johnson was asked if he took full responsibility for the losses and told broadcasters "of course", before adding: “It is mid-term.

Celebrating with activists in Barnet, Mr Starmer said: "From the depths of 2019 in that general election, back on track, winning in the north. Cumberland! Southampton!

"We've changed Labour and now we're seeing the results of that."

He added: "When it comes to London, you can hardly believe those names come off our lips. Wandsworth! They've been saying for years, 'You'll never take Wandsworth from us'. We've just done it! Westminster! It's an astonishing result."

Lib Dems continued their assault on the Tory “Blue Wall”, gaining dozens of seats as the party finally kickstarted its post-Coalition revival. The Lib Dems have been repeatedly punished at the ballot box since propping up the Conservatives from 2010-15. But by 10am, the party was up 57 seats.

Mr Davey, in a speech to activists after a string of victories, said: "The tectonic plates of British politics are shifting beneath Boris Johnson’s feet. And now it’s time for Conservative MPs to plunge him into the abyss.

So our message to Conservative MPs here in Wimbledon and across the Blue Wall is this: If you don’t get rid of Boris Johnson, if you don’t give struggling families and pensioners more help with the cost-of-living crisis, f you don’t start listening to people and stop taking them for granted, we are coming for you."

The Prime Minister accepted that voters had sent a “message” to ministers to concentrate on the issues that matter to them.

“The big lesson from this is that this is a message from voters that what they want us to do above all – one, two and three – is focus on the big issues that matter to them, taking the country forward, making sure we fix the post-Covid aftershock, get us all through the economic aftershocks in the way we got through Covid, fix the energy supply issues, that’s where the inflationary spike is coming, and keep going with our agenda of high wage, high skill jobs,” he said.

He said the Government is “absolutely determined” to help people through the “economic aftershocks” of Covid with “every ounce of compassion and ingenuity”.

“Now, I’m not going to pretend to you… that… there isn’t going to be a difficult period as we come through the aftershocks of Covid. There is," he said.

“But what I’m going to tell you is that this Government is absolutely determined to keep going with every ounce of compassion and ingenuity that we have, get people through the economic aftershocks, help people with the costs, but make sure that we address the supply side issues, particularly energy, in order for the economy to keep growing.”

Previous : Sinn Fein on course to become biggest party in Northern Ireland Assembly
Next : Woman who went on two-week holiday and left dog in filthy cage to die avoids jail