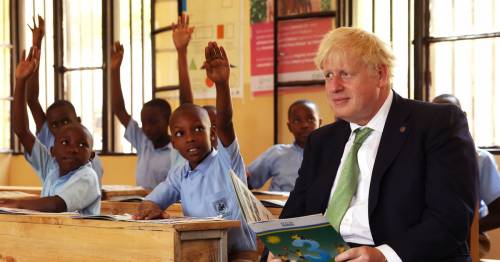 Defiant Boris Johnson has said it would be “crazy” for him to quit – even if he loses BOTH of today’s crunch by-elections.

Polls opened at 7am in Wakefield, which Labour are tipped to regain, and Tiverton and Honiton where Lib Dems claim to be “neck and neck”.

The PM admitted the Tories could suffer a double defeat in the Red Wall and ‘Blue Wall’ – despite a 24,000-strong majority in Tiverton.

But he rebuffed suggestions the results would be his personal responsibility – or that he would finally throw in the towel.

The Prime Minister will be 5,000 miles away at the opening of the Commonwealth Heads of Government Meeting when the results roll in.

Moments after the verdict that could doom his premiership, he will speak to 54 nations alongside Prince Charles in Kigali, Rwanda – followed by a press conference.

The Mirror asked how much he would be personally responsible for the results – and whether he’d throw in the towel if he lost both.

But Mr Johnson said: “Come on, it was only a year ago that we won the Hartlepool by-election.

“Governing parties generally do not win by-elections particularly not in mid term.

“You know, I’m very hopeful, but you know, there you go. That’s just the reality.”

When the Mirror suggested it sounded like he would stay on, the Prime Minister replied: “Are you crazy?”

Losing both by-elections would spark a new wave of Tory anger less than three weeks after the PM survived a no confidence vote.

Mr Johnson will miss PMQs and any Tory meetings back home in the wake of the result, leaving him vulnerable to backbench plotters.

Boris Johnson speaks to journalists, including the Mirror, as he heads to Rwanda for the Commonwealth Heads of Government Meeting
(

He will be out of the country for around eight days to attend a triple-whammy of the CHOGM, G7 and Nato summits.

Rebel Tories cannot hold another no confidence vote for a year after they lost their bid to oust him 211-148.

But some have discussed changing the rules of the back bench 1922 Committee to hold another contest six months after the last.

The Prime Minister refused to be drawn on whether it would be unfair to change the leadership challenge rules.

He said: “I’m focused entirely on delivering on the agenda of this government.

Voters go to the polls during the Wakefield by-election
(

Labour is tipped to win the Wakefield by-election as it continues to build back support in its former 'Red Wall' heartlands.

Meanwhile, the Lib Dems are believed to be "neck and neck" with the Conservatives in the Devon seat of Tiverton and Honiton.

Tory party sources, while insisting they could hang on to Tiverton, were privately downbeat about their chances of retaining Wakefield.

One said: "We're not kidding ourselves that this is going to be an easy night. And we all know some of this is about the Prime Minister personally".

Labour sources were upbeat about their chances of overturning the Tories' 3,358 majority in the Yorkshire seat.

Two campaign vans with the slogan "Wakefield this is your chance to boot Boris Johnson out" will drive round the constituency as voters go to the polls.

It will also feature an image of an eviction notice on the door of No 10 as the party seeks to capitalise on the PM's unpopularity.

One local source said: "On the doorsteps we've noticed that people are very motivated to vote against Boris Johnson.

People arrive to vote at Mackarness Hall on June 23, 2022 in Honiton
(

"It started with Partygate but has moved onto his broken promises over things like Brexit and transport infrastructure".

But they admitted that "apathy and disillusionment" in politics in general was high and that could dampen turn-out despite the "scorching" weather.

Labour's candidate Simon Lightwood, who requires a 3.8% swing to win, could miss the count tonight after he tested positive for Covid.

The contest was triggered after ex-Tory MP Imran Ahmad Khan was found guilty of sexually assaulting a teenage boy.

The Lib Dems have to overturn a massive majority of 24,239 to take the rural seat of Tiverton and Honiton.

Tactical voting in the previously safe 'Blue Wall' seat, with Labour voters switching to the Lib Dems to punish the Tories, is expected to help.

Neither Keir Starmer nor any Labour frontbench MPs has visited the constituency during the election campaign.

"We're seeing a lot of apathy among traditional Tories who say they usually vote Conservative but they don't like Boris," one said.

"We think that a fair number of them will just stay at home."