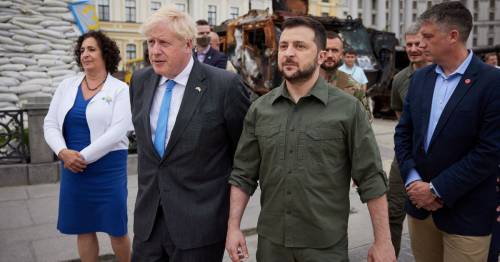 Boris Johnson has sent a grim warning to Western leaders not to agree a “bad peace” in Ukraine – saying it would be a “disaster”.

Speaking before the G7 and Nato summits, the Prime Minister admitted “fatigue” is now setting in over the four-month-old invasion.

But he said backing down now would “trigger” new brutality by Vladimir Putin “whenever he wanted”.

Mr Johnson also refused to rule out putting UK troops in harm’s way to get grain out of the Russian-blockaded Black Sea port of Odessa.

“There is a very strong moral case for trying to get the grain from Odessa,” he said. “It is 23 million tonnes. Basically it is going off.”

It came as Foreign Secretary Liz Truss today accused Russia of "weaponising hunger" and using food security as a "callous tool of war" with its blockade of Ukrainian grain.

Armed soldiers keep guard outside of a Ukrainian military base in the town of Perevevalne near the Crimean city of Simferopol on March 17, 2014 in Perevevalne, Ukraine
(

Boris Johnson added: “We need to do whatever we can to get it out.

“Under the Montreux Convention we can’t, no navy can go into the Black Sea, the Turks won’t allow that to happen. But we certainly need to find a way of getting the grain out that’s not subject to Putin’s control.

“That requires a great deal of care and thought and we are working with the Turks and other European partners to see what we can do.

“But we are a long way off trying to send the Navy through the Bosporous and into the Black Sea.”

Ukraine has been described as the "bread basket of Europe" and was one of the world's largest exporters of wheat, corn and sunflower oil.

But the Russian invasion and Moscow's sea mining to prevent access to the southern ports, including Odessa, has halted much of the flow and jeopardised world food supplies.

Speaking at a press conference alongside Turkish foreign minister Mevlut Cavusoglu in Ankara, Ms Truss warned of "devastating consequences" unless “urgent action is taken within the next month ahead of the new harvest”.

Accusing Vladimir Putin of "weaponising hunger" with the blockade, she added: "He is using food security as a callous tool of war.

“He has blocked Ukrainian ports, and is stopping 20 million tonnes of grain being exported across the globe, holding the world to ransom.”

NATO leaders are expected to discuss how grain exports can leave the war-torn country when they meet for a crunch summit in Madrid next week.

The Prime Minister said the war would “come up a bit” at the Commonwealth Heads of Government Summit in Rwanda, which he will help open with Prince Charles today.(FRI) But nine of the 54 Commonwealth nations stopped short of demanding Putin’s at the UN, including India, Pakistan, South Africa and Bangladesh.

The Prime Minister is likely to get a warmer reception when he jets to the G7 summit in Germany on Saturday night, and the NATO summit in Madrid next week.

But he admitted: “There is no question that there is a lot of Ukraine fatigue now in the world.

“So my message to colleagues at the G7 and at NATO in particular is going to be now is not the time to settle and encourage the Ukrainians to settle for a bad peace, for a peace for which they are invited to give up chunks of their of territory in return for a ceasefire.

“I think that would be a disaster. It would be a trigger for further escalation by Putin whenever he wanted.

“That would do much further economic damage to the world.”