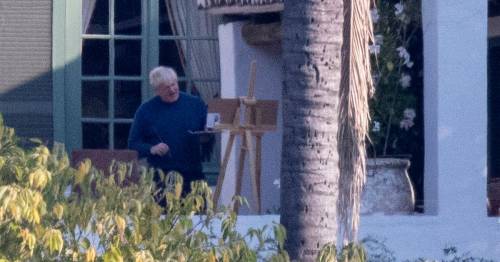 Arrogant Boris Johnson was back behind his beloved easel this morning without a care in the world.

As Britons struggled with mounting problems at home the Prime Minister was busy back playing with his paints finishing his picture.

The man dubbed “the weasel with his easel” has been criticised for taking a late summer break at a £25,000 a week villa as the UK battles against fuel and food shortages.

After being caught painting on Tuesday evening as the sun set in the hills over his 600 acre estate near Marbella it was thought Johnson would go into hiding again.

Wearing a dark blue shirt and casual trousers, with a white tie-up cord, he occasionally scratched his head as he added strokes to his work
(

But he was back with his brushes before 10am – determined to complete his landscape painting.

At one stage he stood back to his admire his work and showed it to a friend.

Wearing a dark blue shirt and casual trousers, with a white tie-up cord, he occasionally scratched his head as he added strokes to his work.

The Prime Minister has so far refused to comment on a damning report by MPs detailing how the UK failed to properly deal with the Covid-19 pandemic, instead choosing to sun himself in the Spanish retreat owned by Tory Peer Zac Goldsmith.

A damning report has detailed how the UK failed in its response to the Covid-19 pandemic, but Johnson has not commented
(

The Science and Technology Committee and the Health and Social Care Committee said ministers waited too long to push through lockdown measures in early 2020, leading to thousands of unnecessary deaths.

The 151-page document listed errors from abandoning community testing in March 2020, to the botched NHS test and trace system and the disastrous policy of discharging people into care homes without testing.

The report said there was a "degree of groupthink" that meant "we were not as open to approaches being taken elsewhere – such as earlier lockdowns, border controls and effective test and trace – as we should have been".

But Cabinet Office Minister Stephen Barclay denied the claim – although he later admitted he had not yet read the report.

Mr Barclay also repeatedly refused to apologise for Covid failings during a bruising round of interviews on Tuesday.

Previous : Dad-of-two told by doctors he had ‘headaches’ has rare inoperable brain tumour
Next : Boy, 4, suffers horror burns in explosion ’caused by dad furious wife was divorcing him’ – World News