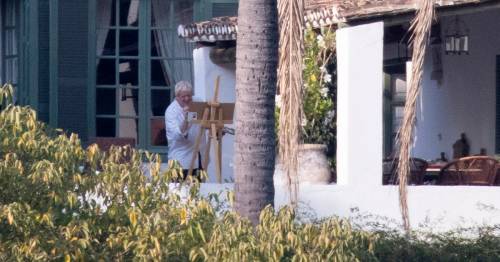 As Boris Johnson stood at his easel trying to emulate his hero Winston Churchill, at home he was being condemned for failing to lead the nation through its worst crisis since the Second World War.

Families of those who died of Covid-19 were calling on the Prime Minister to apologise for his Government’s appalling failings during the pandemic, after a devastating report by MPs.

And as Mr Johnson relaxed in the Spanish villa owned by his billionaire pal, Zac Goldsmith, who he made a peer, industry chiefs were warning soaring energy prices could shut factories, costing thousands of jobs.

The country was also tackling labour shortages, price hikes, and a brutal Universal Credit cut, and with Cop26 less than a month away, the PM was advised to “get off his sun lounger and start being a statesman” amid warnings he needs to take the climate talks in Glasgow seriously to avoid a “greenwash” summit.

What do you make of the PM's holiday? Have your say in the survey below

The PM is reportedly in a 'super bubble'
(

But Mr Johnson carried on his holiday with wife Carrie and their year-old son Wilfred regardless, leading the Spanish press to react to his sunshine break with disbelief. The El Pais newspaper said: “Boris Johnson spends a week in Marbella with his family while the United Kingdom tackles its greatest crisis since the pandemic.”

Mr Johnson has failed to comment on a report on ministers’ handling of the pandemic by the Health and Social Care and Science and Technology committees.

It concluded that 20,000 lives could have been saved if the country had gone into lockdown earlier in March last year.

The PM concentrates on his art
(

Cabinet Office Minister Steve Barclay, who was sent out to defend the Government, admitted he had not even read the report and refused more than a dozen times to apologise – even though 150,000 people have died.

Asked if he wanted to say sorry for the failings, he said: “We’ve followed throughout the scientific advice. We got the vaccine deployed extremely quickly, we protected our NHS.”

Another Tory minister George Freeman said: “It’s too early for any proper discussion about blame and fault. This was a biomedical Battle of Britain and I suspect mistakes were made.”

The Goldsmith’s Ranch in Benahavis
(

Rivka Gottlieb, 49, believes the decision not to lock down earlier last spring cost her dad Michael, 73, his life in April.

She said: “I remember at the time, so many voices clamouring for an earlier lockdown, including from the scientific community.

“So the finger pointing, and the blaming the scientists, I just don’t accept it, I don’t buy it.

“Ultimately, the buck stops with the Government. They are responsible for the decisions and they made very poor decisions.”

Lindsay Jackson, whose mother Sylvia died in a care home last April, criticised Tory MP Jeremy Hunt, one of the authors of the report, for comparing the handling of the pandemic to a football match with “two very different halves” because of the success of the vaccines roll-out. Ms Jackson said: “This is not a game.

“My mother didn’t lose her life in a game. I think she lost her life because of mistakes that were made by the Government.

“I knew lockdown was too slow, I knew the social care sector wasn’t being looked after.”

…what the nation Sees
(

Labour leader Keir Starmer called for the PM to apologise to bereaved families. He said: “The Prime Minister should take responsibility because the responsibility is his. He should apologise.”

Eluned Morgan, health minister in Labour-run Wales, has said sorry for mistakes made by the Welsh government. She said: “I’ve never understood why politicians have such a problem in apologising.”

The PM’s former chief aide, Dominic Cummings, branded Mr Johnson a “joke” after some of his criticisms of the workings of government were vindicated in the report. He told Sky News: “The government system for dealing with crises is a disaster.

“The system was bad for many years before Covid. Me and others put into place work to try and improve the system in 2020 after the first wave. Unfortunately, the Prime Minister, being the joke that he is, has not pushed that work through.”

The Cop26 talks begin on October 31, and Shadow Business Secretary Ed Miliband today said the PM should “get off his sun lounger and start being a statesman”.

Labour’s former Climate Change Secretary said the Government had not properly set out what the Cop26 summit should achieve.

In a speech on Wednesday, Mr Miliband will set out the “undeniable and frightening maths” on climate change.

Mr Johnson is struggling to convince Tory MPs to back his drive for the UK to hit net zero carbon by 2050.

Ministers will confirm next week that green surcharges will be shifted on to gas in a move designed to nudge customers toward lower-carbon electricity instead.

The Tories’ Heating and Boiler strategy aims to make electricity cheaper and gas more expensive in the next 15 years.

The installation of new gas boilers after 2035 will be banned and consumers handed subsidies of between £4,000 and £7,000 for electric heat pumps.

A decision on replacing the gas network with hydrogen will be put back to 2026, amid safety concerns.

Alok Sharma, president of the Cop26 summit, said today that Glasgow was a “make or break” moment for the wealthiest countries to stop global temperatures soaring by more than 1.5C.

In a speech in Paris, Mr Sharma said: “If temperatures continue to rise we will step through a series of one-way doors, the end destination of which is climate catastrophe.”

Mr Johnson, a keen amateur painter, is expected to return from his holiday on Thursday.

Winston Churchill was famously photographed painting in Morocco in the 1960s, although Mr Johnson could have been trying to emulate Congo the chimpanzee, another keen amateur who became famous for his artwork in the 1950s.

Employees at the villa have stayed on-site in a “super bubble” and signed non-disclosure agreements preventing them revealing details of the PM’s holiday.

'Not a pretty picture'

"Everybody is entitled to a holiday, including the Prime Minister, but Boris Johnson has undeniably chosen a particularly bad time to escape a worried country by booking his own trip to Spain.

While he enjoys painting pictures in the sunshine, back home many millions of workers, families and businesses are fighting serious crises on multiple fronts.

While he indulges in the luxury of a grand villa in Marbella courtesy of a Conservative Government Minister gifted a peerage, companies in the glass, steel, ceramic, paper and cement industries are concerned soaring crippling fuel bills could shut them down.

While he relaxes abroad, shortages of lorry drivers and agricultural workers are emptying supermarket shelves and making life tougher for those who couldn’t go away.

While he decides whether to swim or play tennis, households he callously hit hard by snatching £20 a week Universal Credit face choosing between hearing and eating.

And while he contemplates life, mourning relatives are asking why he isn’t apologising for the thousands of Covid victims needlessly killed by his and his Government’s incompetence.

The angry public voices raised about this ill-judged holiday are entitled to be heard and in a democracy it is demonstrably in the public interest for voters to read and see what their absent Prime Minister is doing while they grapple With making ends meet.

Yes, Johnson’s suffered Covid himself last year and his mother died recently so he could do with a break like everybody else.

Yet when he’s contributing to the woes of those hardworking grafters, families and businesses rather than giving them a break at what is a stressful time, Britain screaming our for incisive leadership, Johnson’s reinforcing growing evidence that he’s a trivial figure when a serious Prime Minister’s required.

A good PM would be at work, not on holiday. Going awol tells us much about Johnson that is disturbing."