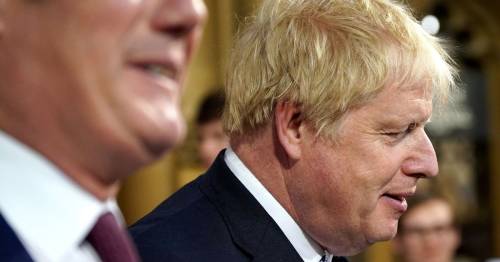 Boris Johnson has refused to say that he will resign if Keir Starmer steps down over Covid lockdown rules.

The Prime Minister has found himself under mounting pressure to leave No10 after the Labour leader confirmed he'll quit if he receives a Fixed Penalty Notice (FPN).

In a statement at Labour HQ on Monday, Mr Starmer said he had always followed the rules throughout the pandemic – and accused his critics of cynical attempts to tar all politicians with the same brush after the PM was found to have broken his own lockdown rules.

"We are not all the same. I am different. and I've set out today how I'm different," Mr Starmer said.

"The idea that I would then casually break those rules is wrong. And frankly I don't believe those accusing me believe it themselves."

Mr Johnson received an FPN in April for attending his own lockdown birthday bash in the first lockdown, which was held in No10's Cabinet Room.

Chancellor Rishi Sunak was also handed an FPN for attending the same bash, "accidentally" he claims, insisting he came early to a meeting.

The pair have both paid their £50 fines.

When asked if the PM will quit his role if Mr Starmer does, the PM's official spokesman said: "He came to the house and took responsibility and offered an unreserved apology for the mistakes made."

He spoke shortly after the pair were photographed walking side-by-side joking and smiling, ahead of the Queen's Speech.

Leading the Humble Address, Conservative MP Graham Stuart included a few gags kicking off with: "The only thing opening up for [the leader of the opposition] in the North, is a police investigation."

Shortly after Mr Starmer made his statement announcing the terms on which he would quit, Hannah Brady, spokesperson for Covid-19 Bereaved Families for Justice, said: "This is the right decision by Keir Starmer and in contrast to Boris Johnson, shows integrity, decency and respect to the bereaved.

"At the end of the day the country can’t be led by someone who's been fined for breaking lockdown rules.

"The pandemic isn’t over, and if, God forbid, a new vaccine resistant strain should emerge, it’s essential we have a leader with the moral authority to introduce restrictions if needed. If we don't, lives could be lost as a result."

She urged Conservative MPs to "do the decent thing" and remove Mr Johnson from power.

The Labour leader has faced questions about his future as allegations mounted over his visit to Durham last year while campaigning in the Hartlepool by-election, when he was pictured drinking a beer and a takeaway curry with campaigners.

Covid rules at the time banned indoor gatherings but there were exemptions for work purposes. Political campaigning was also permitted ahead of the elections.

Previous : Man charged with killing mother at sea to inherit estate
Next : Tory MP denies failing to stop after Mercedes crashes into lamppost