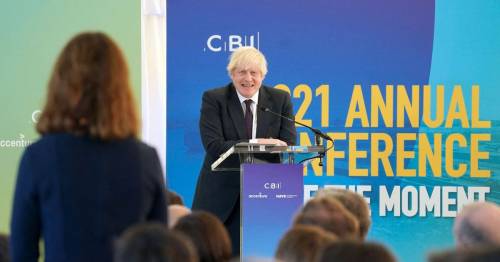 Boris Johnson today refused to back down over a “con” change to his care cap as he faces a furious revolt tonight from Tory MPs.

Downing Street confirmed it will push ahead with changes that will inflict higher-than-planned costs on poorer and northern homeowners.

It said angry Tories will get to see an impact assessment – but it is likely to only be published after the vote at 10pm tonight.

The PM’s spokesman said: “We’ll continue to listen to views put forward [by people] who are invested in this policy but we continue to believe this is a system that is necessary, fair and responsible.

“The system benefits those who are worst off.”

The Prime Minister's plans for social care reform will leave homeowners in the North and areas with lower house prices paying more towards care than under what was planned until last week.

There will be a £86,000 cap on lifetime care costs. But under a change unveiled last week, anyone with assets under £100,000, earning them government help, will only see what they personally pay, not the state funding, contribute to the cap.

That means it will take them much longer to reach the £86,000 cap than they would have done.

The proposal – branded an "inheritance tax on the North" – will save the Government £900million a year on the social care bill.

But angry Tory backbenchers, already mutinous over the Government's broken promises on Northern rail and over Tory sleaze, are pushing Mr Johnson to drop the plans.

Yet Boris Johnson claimed the Government's proposals for reform of the adult social care system in England were "incredibly generous".

Speaking at the CBI annual conference in South Shields, Mr Johnson said: “Under the existing system nobody gets any support if they have assets of £23,000 or more. Now you get support if you have £100,000 or less, so we are helping people.

How someone in a care home for 10 years will lose assets based on the current, old and new plans
(

"It is in fact more generous than some of the original proposals of Andrew Dilnot because it helps people not just who are in residential care but also people who benefit from domiciliary care as well.”

The PM’s spokesman repeatedly refused to repeat his 2019 manifesto vow that no one would have to sell their home to pay for care – saying: “I’m not going to predict individual circumstances”

Instead, No10 said: "Anyone who is living in their home, that will not count as an asset when considering the cost of care.”

The spokesman added “there are deferred protection arrangements as well” to allow people to put off selling up until after their own death.

Asked why the PM was not allowing some parents to pass on their homes to their children, he replied: “It would be wrong to conflate the two issues”.

The small print on the plans, sneaked out last week, means state-funded care costs will not count towards the lifetime of maximum £86,000, with only private contributions counted.

Homeowners with high care needs but less expensive property are expected to be hit with higher costs, while those with pricier homes will be unaffected.

The architect of the original changes has warned the Tories’ care costs changes will hit England’s poorest pensioners with “catastrophe”.

Sir Andrew Dilnot, who drew up plans for a care cap several years ago, said changes to his plan will hit those with fewer assets hard.

Former Cabinet minister Robert Buckland urged ministers to "look again" at the plans saying there was "a lot of concern" on the Tory benches with more MPs expected to rebel.

He added: "I'm not particularly happy with it… especially when one of the main messages for introducing this levy was 'you won't need to sell your house for care'."

"But, to people who are thinking of voting against the Government, all I would say is that once this cap has been introduced at this current level, it will be entirely open to governments in the future to change the way the cap is calculated to make it more progressive going forward."