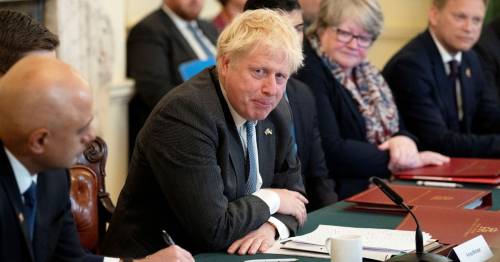 Boris Johnson today pitted the public against striking rail workers as he accused them of “aggravating” the nation’s teenagers, workers and pensioners.

The Prime Minister told his Cabinet the “country as a whole” had to “stay the course” as thousands of services were cancelled on the first day of a three-day walkout, on and off until Saturday night.

Moments later, Mr Johnson indicated millions of public sector workers could not expect a proper pay rise this year because inflation is running at more than 10%.

With teachers’ and nurses’ pay reviews due to report back imminently, he said “the public would expect the government to stick within their means at a time of global cost of living pressures”, No10 said.

And the PM’s spokesman confirmed he agreed with Chief Secretary to the Treasury Simon Clarke, who said it will not be “sustainable” to raise public sector pay by 9% or 10%.

That will mean a real-terms pay cut for millions of workers – risking a Summer of Discontent as strikes spread. Pay is one of the issues RMT union members are striking over, alongside conditions and 2,500 maintenance job cuts.

It came as Tory ministers confirmed plans to replace employees with agency staff as soon as this year to break future strikes.

Transport Secretary Grant Shapps told Sky News nothing could be done to "change the reality" of the strikes that are taking place on Tuesday, Thursday and Saturday this week.

But he added: "For future strikes… we are going to ensure that the law is firmly on the passengers' side, on the consumers' side."

RMT union chief Mick Lynch blasted the proposed change in the law, which would allow flexible workers, including agency staff, to cover for those on strike.

Mr Lynch warned the dispute could continue for months, adding: "It is clear that the Tory Government, after slashing £4 billion of funding from National Rail and Transport for London, has now actively prevented a settlement to this dispute."

Rail workers are striking now, and some expect it to spread into a Summer of Discontent
(

The Department for Transport disputed Mr Lynch's clams, adding that it has cost taxpayers about £600 per household to keep the railway running during the coronavirus pandemic.

He said that was “all sorts of unnecessary aggravation” and the strikes were “wrong and so unnecessary”.

Mr Johnson’s spokesman later told journalists: “He said the union barons need to sit down with Network Rail and the train companies to get on with coming to a sensible compromise for the good of the British people and the rail workforce.”

In the same meeting, Mr Johnson, Chancellor Rishi Sunak and Chief Secretary Simon Clarke led a discussion suggesting pay could not rise by the same amount as inflation.

An empty Lime Street train station in Liverpool at peak hour, during the 'biggest rail strike in 30 years’ with more than 50,000 railway workers walking out.
(

Mr Sunak “emphasised that the government had responsibility to not take any action that would feed into inflationary pressures, or reduce the government’s ability to lower taxes in the future”, No10 said.

Asked if public sector workers should just accept they’re going to get a real terms pay cut, Boris Johnson’s spokesman replied: “We will have more to say once we’ve got [pay review] reports in.

“But you will have heard Simon Clarke yesterday talk about the importance of not feeding into inflationary pressures, and that point was emphasised by the Chancellor again today.

“And the Prime Minister does very much agree with that.”

He added: “Simon Clarke talked about that double digit pay rises – and we’re in line for double digit inflation – is unlikely. I can’t be definitive without getting ahead of the pay review body process.”

Cabinet was given a presentation on restraint in the public finances
(

We are “servicing our debt to the tune of £83bn this year”, the spokesman said, and “the consensus is that providing pay rises that chase inflation only adds to the problem and it is that act that would take the most money away from the public in the long term.”

Despite this, No10 confirmed the government is looking at whether there are “any unnecessary restrictions” on when top executives are paid in shares.

However, Boris Johnson’s spokesman insisted “as far as I’m aware there’s no plans to change the cap on executive pay”, despite reports of the opposite.

He confirmed restrictions on share ownership “are being explored” but asked if the cap on bonuses could be changed he said: “I’m not aware of any plans to do that, no.”

Previous : Labour drawn into rail strikes row as frontbenchers ordered away from picket lines
Next : Runaway 50-1 outsider catches jockeys out at Beverley as he clings on for shock win