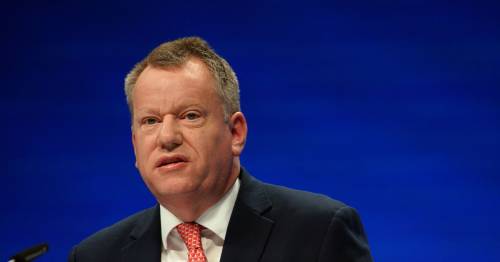 Boris Johnson only signed the Northern Ireland Protocol – which has jeopardised trade between Britain and the province – to get Brexit done, the Prime Minister’s top EU envoy has admitted.

Brexit Minister Lord David Frost issued the confession as he addressed diplomats in Portuguese capital Lisbon while launching his latest attempt to unpick the pact.

He said: “We knew that some aspects of the protocol as it stood when they were agreed in October 2019 – we knew that these were problematic.

“We didn’t particularly support them ourselves, we agreed with them because it was the right thing to do for the country overall, looking at the wider political debate and the need to deliver on Brexit.

“We knew we were taking a risk and we hoped that we would be wrong and that the protocol would work effectively.

“It turned out we were right – these were risky proposals and they haven’t worked as most people hoped, and that’s why we’ve got to come back to them.”

Mr Johnson insisted he had an “oven ready” deal to complete the UK’s divorce from the EU – and won a thumping 80-seat majority at the December 2019 election with his pledge to “Get Brexit Done”.

However, since the UK formally quit the bloc in January 2020, problems have mounted with the protocol – the mechanism designed to prevent a hard border between Northern Ireland and the Republic.

The 310-mile frontier is the UK’s only land border with the EU.

The EU will tomorrow produce its plans to resolve issues with the protocol, which created a border in the Irish Sea and hampers trade between Northern Ireland and Great Britain.

Tory peer Lord Frost claimed the UK was ready to use an emergency clause to suspend the protocol to safeguard the peace process.

"Northern Ireland is not EU territory. It is our responsibility to safeguard peace and prosperity and that may include using Article 16 if necessary.

"We would not go down this route gratuitously or with any particular pleasure but it is our fundamental responsibility to safeguard peace and prosperity in Northern Ireland and that is why we cannot rest until this situation is addressed."

He also demanded an overhaul of the governance regime which means the European Court of Justice oversees the protocol and the Trade and Cooperation Agreement struck between Brussels and London.

The EU Commission had been "too quick to dismiss governance as a side issue", claimed Lord Frost.

He said: "Our proposal looks more like a normal treaty in the way it's governed, with international arbitration instead of a system of EU law ultimately policed in the court of one of the parties – the European Court of Justice.

"I think the commission have been a bit too quick to dismiss governance as a side issue and the reality is the opposite – the role of the Court of Justice and the EU institutions in Northern Ireland are creating a situation where there is no discretion about how provisions in the protocol are implemented.”

He also accused the EU of using Northern Ireland to try to reverse the referendum result.

"The Northern Ireland Protocol is the biggest source of mistrust between us and for all kinds of reasons we need to fix this problem,” he Brexit Minister said.

"There's a widespread feeling in the UK that the EU did try to use Northern Ireland to encourage UK political forces to reverse the referendum result, or at least to keep us closely aligned with EU.”

Democratic Unionist Party leader Sir Jeffrey Donaldson said changes to the protocol had to go beyond "tinkering around the edges".

"The protocol does not have the support of a single elected unionist in Northern Ireland," he said.

"If it is not replaced, then it will condemn Northern Ireland to further harm and instability.”

Former Conservative MP Gavin Barwell, who was Theresa May’s chief of staff when, as Prime Minister, she was trying to negotiate a Brexit pact, tweeted: “The absolute state of David Frost trashing the deal he negotiated + hailed as a triumph – despite many, yours truly included, warning it was a dud – *and worse* now using it to further undermine our relationship with some of our closest friends in an increasingly dangerous world.”

Shadow Brexit Minister Baroness Jenny Chapman said: “Today was an opportunity for the Government to reset relations with our partners in the EU after a fractious start to our new relationship.

“Instead of approaching the occasion with maturity and in the spirit of cooperation, Lord Frost has effectively asked to rip up the agreement he negotiated – and the Prime Minister signed – just two years ago.”

Previous : Apple warns of cybercrime risks if EU forces it to allow others’ software
Next : ‘Boris Johnson set UK alight then fled – his hero Churchill would turn in his grave’ – Liam Gilliver