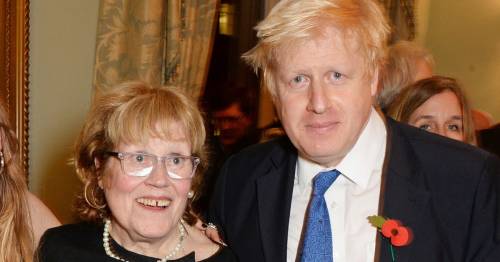 She was loyal and faithful, good to her word even after making a spontaneous promise and went through personal hardships rather than rely on other people’s charity.

Take a look at Charlotte Johnson Wahl’s extraordinary life and you might wonder how her eldest son Boris turned out the way he did.

The PM’s mother, who died this week aged 79, would later describe falling for Stanley Johnson’s charisma and intelligence, then trying her best to bring up their four children through a “ghastly” marriage to a man who often left her on her own and who she suspected was a serial cheater.

And, according to recent revelations, she kept the family together for 16 years together despite his “neglect and philandering”, and an incident which left her with a broken nose – until finally walking away after suffering a breakdown and spending eight months in a psychiatric hospital.

It was in the midst of such a toxic environment that Boris, who was 15 when they divorced, along with his siblings Jo, Rachel and Leo, spent their formative years, going on to split their time between their father’s home and their mother’s new Notting Hill flat.

Have your say on this story in the comment section

Even so, the PM said in 2015 that his mother was the “supreme authority” in his family who taught him “to believe strongly in the equal importance, the equal dignity, the equal worth of every human being on the planet”.

Charlotte, a talented painter, met Stanley at Oxford University while she was reading English, at a dinner organised in his honour after he won the Newdigate poetry prize.

At the time she was already engaged but recalled how Stanley wooed her: “We went for a walk and he suddenly said: ‘Love is sweet. Revenge is sweeter far. To the Piazza. Ah ha ha har!’, which made me laugh so much I fell in love with him.”

They married eight months later, aged 20 and 22, and Charlotte gave up her degree to follow Stanley to the US. Their first child Boris was born in New York in 1964.

With son and then Mayor of London Boris Johnson in 2014
(

Describing how he got his name, she said: ‘When I was three months pregnant, we travelled to Mexico City by Greyhound bus. It was very uncomfortable – I was desperately sick.

“We stayed with a man called Boris Litwin, who drew me aside and said: ‘You can’t travel back like this – here are two first-class air tickets’.

“I was so grateful. I said: ‘Whatever the baby is, I shall call it Boris’.”

After Stanley finished his course Charlotte returned to her studies, completing her English degree while pregnant with Rachel and looking after a ten-month-old Boris.

Charlotte was a talented painter
(

The couple had four children together and moved 32 times during their relationship because of her husband’s work commitments, including one stint in Brussels when Stanley who later became a Tory Euro-MP, got a job with the European Commission.

Talking about bringing up four children, who she taught at home for a year, she said: “They were quite a handful but I loved them tremendously.

“I taught them very odd things that I wanted to know, like how to draw a squirrel. It was such fun, so cosy.”

Charlotte would later remember how her husband would spend more time travelling around the world than with his family, especially after changing his job to work with the Rockefeller Foundation in New York.

She returned to her love of painting to make a living
(

But when he was home, their relationship was increasingly strained. Charlotte told biographer Tom Bower: “Stanley was very bad-tempered. He was always shouting and angry.”

The stresses of their marriage as well as bringing up their children on her own took their toll, as well as rumours of Stanley’s infidelity.

Towards the end of their troubled marriage Charlotte had a breakdown and spent eight months in a London psychiatric hospital.

She said: “My husband and I were not making each other happy, to put it mildly. It was ghastly, terrible.”

Last year it was reported that during thier relationship Johnson Wahl needed hospital treatment after being hit by Stanley.

Biographer Bower alleged doctors spoke to Stanley ‘about his abuse’ while the couple’s children were told a car door had hit their mother’s face.

It was claimed that the incident took place in the 1970s when Charlotte was suffering from obsessive compulsive disorder and had ‘flailed’ at Stanley, who broke her nose when ‘flailing back’. “He broke my nose. He made me feel like I deserved it,” Charlotte told the author.

Stanley, now 81, is said to have deeply regretted the incident and denied he had been violent on any other occasion.

When the couple divorced in 1979 she refused to accept money from her ex-husband and returned to her love of painting to make a living.

She later recalled being “very hard up” and one Dickensian Christmas where all the family could afford was “a capon because turkey was too expensive”.

In 1988 she married Nicholas Wahl, an American professor, and moved to New York, where she painted cityscapes, which were the subject of a sell-out exhibition in 2004. She was widowed in 1996 and moved back to London, where she painted portraits of celebrities including Absolutely Fabulous star Joanna Lumley and author Jilly Cooper.

She was diagnosed with Parkinson’s disease aged 40.

The only time she is known to have asked her son Boris to use his influence was when he was mayor of London. She he asked him to ensure buses didn’t move until everyone was sitting down, because “if you’re disabled, often you fall”.

Describing her Parkinson’s in later life she said: ‘The worst thing is a terrible stiffness. When you want to walk you can’t – you freeze and your feet become attached to the ground.’

Charlotte, who died “suddenly and peacefully” at a London hospital on Monday, continued to paint despite her illness, saying: “I still manage to paint, though my arm will suddenly do a movement which is completely unintentional and that almost brings me to tears.”

Previous : Boris Johnson’s National Insurance hike passes Commons vote despite Tory MPs’ fury
Next : Prince Harry received final gift from Princess Diana when he turned 30 – as requested in her will