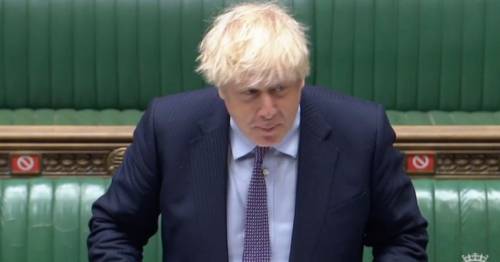 Boris Johnson has moaned Tory MPs are spouting "lefty propaganda" by opposing his cuts for the world's poorest.

The Prime Minister issued the bizarre outburst today after he refused to give a vote on his £4bn slashing of the foreign aid budget.

Ex-PM Theresa May is among Tories who warned the cut – until further notice due to Covid – is having a “devastating impact”, while ex-minister David Davis said it will cost lives.

Rebels believe they have the numbers to overturn Mr Johnson’s 85-seat working majority and reverse the cut, which went from 0.7% of national income to 0.5%.

Yet No10 has declared there are “certainly no plans” to hold a vote.

That is despite the Commons Speaker calling for one and despite Foreign Secretary Dominic Raab promising to report to MPs.

Today the Prime Minister extraordinarily claimed there was no need to hold a vote – because the Tories did well on English council elections.

Despite town halls dealing with potholes and bus stops, not foreign aid, he told Parliament: “The people of this country… were given a vote on this and many other matters very recently.

“And I think they adjudicated very firmly in favour of the balance the government is striking.”

Mr Johnson’s argument is even stranger because the Tories also won the 2019 general election – where they explicitly promised to keep 0.7% aid spending in their manifesto.

The PM went on: “We are in very very difficult financial times.

“All they want to do is run this country down when we’ve increased spending on girls’ education alone to almost £500m. That is a fantastic sum of money to be spending in difficult times. We should be proud.”

He accused the PM of trying to “run from democracy” over the “inhumane” cuts.

Mr Blackford added: “This Tory government is walking away from millions still struggling.

Furious Tory MPs lined up in the Commons yesterday, urging Mr Johnson to stick to his manifesto commitment to spend 0.7% of gross national income on help for the world's poorest.

Ex-PM Theresa May warned the plan would have a "devastating impact" on the world's poorest people and do serious "damage" to Britain's international reputation.

"I've defended a blue brick in that red wall for 33 years and I can tell you that they're wrong," he said.

The angry debate over the temporary cut to 0.5% of GDP is embarrassing for Mr Johnson coming just days before hosting the G7 summit in Cornwall.

No10 has insisted the aid cuts were legal.

The PM’s spokesman said: “We are clear the government’s decision to temporarily reduce the aid budget to 0.5% of GNI is compatible with the International Aid Act.”

He refused to say if the government will give MPs a binding vote on whether to continue the cut.

“There are certainly no plans to bring forward a vote.”