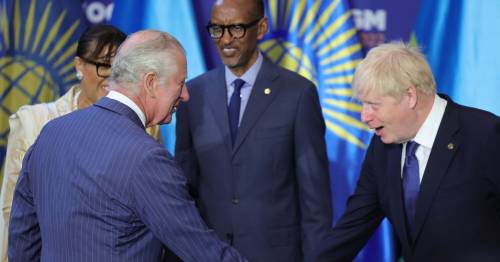 Prince Charles and Boris Johnson have met for the first time since the heir to the throne reportedly branded the government's Rwanda asylum policy "appalling".

The two men were pictured shaking hands ahead of the opening ceremony of the Commonwealth Heads of Government Meeting(CHOGM) in Kigali today.

It came before the pair also had private meeting together, which lasted just 15 minutes over "a cup of tea".

Their handshake also came just hours after the PM's earlier suggestion that he would tell the heir to the throne that there are “obvious merits” to the controversial scheme appeared to frustrate royal aides.

In a series of earlier interviews, Mr Johnson struck out at “condescending” opponents of his stalled scheme to forcibly remove migrants who arrive through unauthorised means to Rwanda.

And he clearly said he would defend the policy to the heir to the throne if he raised it in their meeting, the first time they will have spoken since the Queen’s Platinum Jubilee.

The two men at the opening ceremony of CHOGM this morning
(

Meanwhile at the opening ceremony today, Charles told Commonwealth leaders the potential of the family of the nations for good cannot be realised until we all “acknowledge the wrongs which have shaped our past”.

Charles described how he was on a personal journey of discovery and was continuing to “deepen my own understanding of slavery’s enduring impact”, in a speech at the opening of a Commonwealth summit in Rwanda.

The two men later met for a private meeting
(

He recognised the roots of the family of nations “run deep into the most painful period of our history” and acknowledging the wrongs of the past was a “conversation whose time has come”.

But there was no apology from the heir to the throne for the royal family’s involvement in the transportation and selling of people for profit.

Charles told the gathering of prime ministers and presidents, who included Mr Johnson, he could not “describe the depths of my personal sorrow at the suffering of so many” during slavery.

Prince Charles gives his speech at the opening ceremony
(

The prince told the world leaders the family of nations was “uniquely positioned to achieve such positive change in our world”, adding: “To achieve this potential for good, however, and to unlock the power of our common future, we must also acknowledge the wrongs which have shaped our past.

“Many of those wrongs belong to an earlier age with different – and, in some ways lesser – values. By working together, we are building a new and enduring friendship.”

Charles, who will succeed the Queen as head of the Commonwealth, went on to say: “For while we strive together for peace, prosperity and democracy, I want to acknowledge that the roots of our contemporary association run deep into the most painful period of our history.

“I cannot describe the depths of my personal sorrow at the suffering of so many, as I continue to deepen my own understanding of slavery’s enduring impact.

“If we are to forge a common future that benefits all our citizens, we too must find new ways to acknowledge our past. Quite simply, this is a conversation whose time has come.”