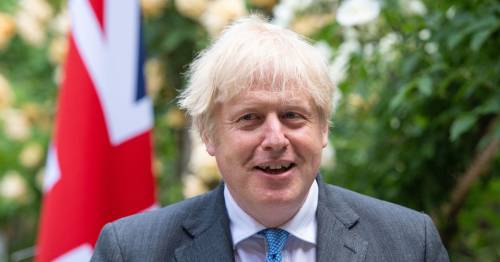 Boris Johnson made a joke about Partygate during a speech to Tory MPs – but was interrupted by a duck pooing on one Red Waller’s head, it has been reported.

The Prime Minister held a reception for Conservative MPs in the Number 10 garden on Tuesday – during which he joked that it was now a “legal Downing Street garden gathering.”

But according to the Times, the address was interrupted by Mr Johnson’s dog, Dilyn, chasing a duck – which promptly flew into the air and defecated on the head of Bishop Auckland MP Dehenna Davison.

The newspaper also reported ministers joked about the Prime Minister and Chancellor being fined for breaking Covid rules during a Cabinet away-day in Stoke-on-Trent.

Before the meeting on Thursday, senior ministers are said to have broken into a chorus of “Happy Birthday” for Chancellor Rishi Sunak, who turned 42 that day.

Both the Chancellor and Prime Minister were fined by police for attending a party to mark Mr Johnson’s 56th birthday in the Cabinet Office, during the first lockdown in 2020.

It comes after Boris Johnson admitted he’s terrible at working from home, and spends lots of his time wandering around, making cups of coffee and nibbling cheese.

He told the Mail: “My experience of working from home is you spend an awful lot of time making another cup of coffee and then, you know, getting up, walking very slowly to the fridge, hacking off a small piece of cheese, then walking very slowly back to your laptop and then forgetting what it was you’re doing.”

Police have now issued more than 100 Partygate fines over lockdown-breaking events in Downing Street and Whitehall, it was revealed this week.

Scotland Yard said it had referred 50 additional fixed penalty notices over Partygate events to the criminal records office since their last update in April.

The Metropolitan Police said in a statement: "As of Thursday 12 May, Operation Hillman, the investigation into breaches of COVID-19 regulations in Whitehall and Downing Street, has made more than 100 referrals for fixed penalty notices (FPNs) to the ACRO Criminal Records Office.

"These referrals have continued to be made throughout the period since our last update on Tuesday 12 April and the investigation remains live."

No10 confirmed that Boris Johnson has not received a fine in this latest tranche, which are believed to include penalties for guests at the Downing Street Christmas party in December 2020, first reported by the Mirror.

The Prime Minister's official spokesman said: "With regards to the Cabinet Secretary and the Prime Minister, I don't have any update … the position (is) we will update you if that were to change."

Previous : Mum forced to eat just FIVE foods over and over after tiny bug bite
Next : Woman has to put tube into her neck just so she can breathe due to rare condition