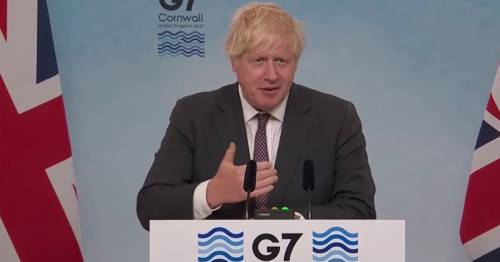 Boris Johnson has tried to laugh off his poor timing after his G7 press conference suffered an epic clash with the football.

The Tory leader had tried to bring forward his press conference at the summit in Cornwall as he wanted to avoid clashing with England's Euro 2020 debut against Croatia – without causing a diplomatic incident.

The PM's aides had strained to avoid conflicting with the 2pm kick-off time but were hemmed in by protocol.

By tradition the host nation of the G7 has their press conference first – and talks in Cornwall broke up just before 2pm.

A last-ditch bid was made to bring forward the timing to 1.45pm – 15 minutes before kick-off. 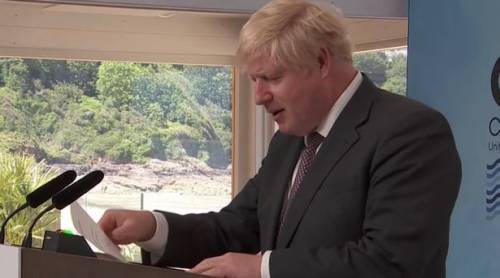 A last-ditch bid was made to bring forward the timing to 1.45pm
(Image: Sky News)

But in the end the Prime Minister walked on stage just after 2pm.

He joked: "I’m sorry to hear that due to their pre-existing commitments, the England football team are not able to watch this press conference in the way I’m sure they would like.

"But I hope that following their resounding victory they will be able to catch up on the triumphs of the G7 later on."

The PM also said "everybody should cheer for England" after some fans booed players taking the knee today. 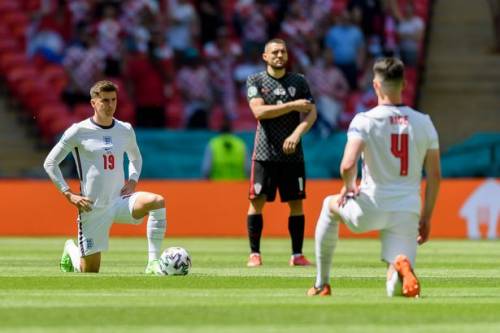 Mason Mount of England and Declan Rice of England kneel down as a sign against racism
(Image: DeFodi Images via Getty Images)

But he refused to say if he personally would take the knee if he was called up to play for England.

"I live in hope but I think my greatest fans can see that’s not going to happen," said the Prime Minister at the G7 summit.

The PM – who's repeatedly dodged questions about whether he would take the knee – claimed it was “one of the most implausible hypotheses yet constructed of all the hypothetical questions thrown my way.” 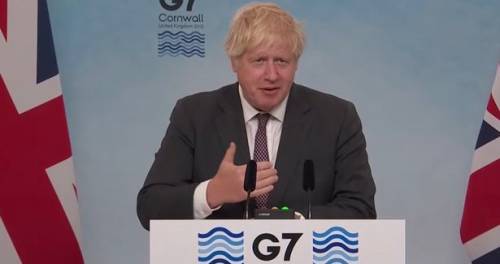 As US President Joe Biden made a speedy exit from the three-day summit to Windsor Castle to meet the Queen, Mr Johnson hailed the outcome of the gathering in Cornwall.

In an apparent swipe at Donald Trump, the PM said leaders wanted to “reject some of the selfishness and nationalistic approaches that have marred some of the initial global response to the pandemic.”

He also said G7 leaders had pledged “over 1billion doses" of spare vaccine, "either directly or through funding to COVAX” – following reports the final pledge had fallen short of a cool billion.

Gordon Brown warned the summit could become a "moral failure" by failing to pledge more to the world's poorest nations.

Elsewhere Mr Johnson refused to confirm the end of Covid lockdown will be delayed by four weeks – saying ahead of tomorrow's announcement: "We don’t want to get it out in dribs and drabs".

Previous : UK does not believe Covid pandemic leaked from Wuhan lab – ‘for now’
Next : Taiwan says will be ‘force for good’ after unprecedented G7 support