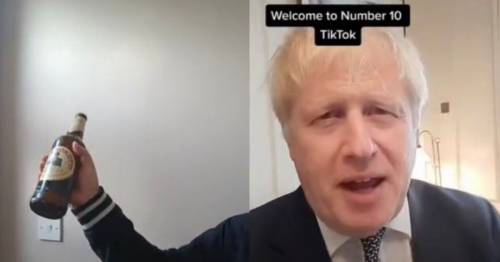 Boris Johnson joined TikTok yesterday, and may regret it already.

Number 10 now has an official account on the Chinese-owned, Gen-Z social network.

For the blissfully uninitiated, TikTok allows users to post short videos, often accompanied by a song.

If you’re over 40, it's is the reason your children or grandchildren are always practicing weird, 30 second-long dance routines.

But in their latest attempt to make the Prime Minister appear down with the kids, Number 10’s social media team may have made two serious errors – they not only left comments switched on, they didn’t disable duets.

You see, TikTok allows users to take videos made by other people, and insert a video of themselves reacting or commenting on it.

For the Twitter users out there, it’s like a video quote tweet – and the top duets can be found with a single tap from the original video.

You remember that week last year when everyone was suddenly obsessed with sea shanties? Duetting was what allowed people to layer their own harmonies on top of the original video.

You can see where this is going.

At the time of writing there have been almost 250 duets of Mr Johnson’s TikTok debut.

In the original, the Prime Minister thanks people for “tuning in” to his “TikTok site”, assuring them it would be different to the Government’s existing presence on Snapchat, Instagram, Facebook – and, for some reason, LinkedIn.

And he insisted users “won't necessarily catch me dancing”, for which we can obviously be thankful.

At the time of publication, the top comment on the video was a plea for the return of 5p Freddos.

But it was in the duets where TikTok’s chaotic energy really shone through.

Most responses were users gazing silently at their cameras with an expression somewhere between bafflement and derision.

One user superimposed himself on top of Mr Johnson’s video, positioning his finger to look like he’s picking the Prime Minister’s nose.

User “thetokenlatinafriend” posted a video of herself laughing, with a caption that read: “I give it a week before they turn comments off and a month until they shut it down.”

But user “sorafell” topped the lot, by ingeniously positioning his arm to make it look like Mr Johnson was posting his TikTok from the middle of a Downing Street party. It’s probably easier to just watch it than it is for us to explain it.

In case anyone from Number 10 has read this far down the article, you can disable duets in TikTok’s privacy settings. You’re welcome.

Previous : Fabinho injury latest and how it affects Liverpool’s trophy quest for Jurgen Klopp
Next : Neighbours to get vote on plans for home extensions on their street in major shake-up