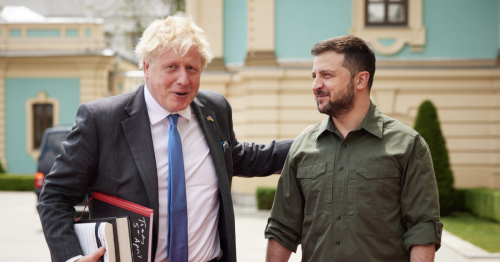 Boris Johnson has jetted to Kyiv for a second meeting with Ukraine's President Volodymyr Zelensky.

In a show of British solidarity with Ukraine's fight against Russia, the Prime Minister travelled to the capital on Friday for a second meeting with Mr Zelensky.

The PM confirmed the news by tweeing a picture of himself with Ukraine's war hero leader, saying: Mr President, Volodymyr, It is good to be in Kyiv again."

Video from the Ukrainian government showed Mr Zelensky warmly greeting the Prime Minister with a “hi, Boris” as he arrived at the presidential palace.

The PM has told President Volodymyr Zelensky that the UK is prepared to launch a major operation to train Ukrainian armed forces, Downing Street has said.

He has said Britain could train up to 120,000 troops every 120 days and No10 said international partners would be invited to host the programme, if the offer is accepted by Ukraine.

In a statement, Mr Johnson said: “My visit today, in the depths of this war, is to send a clear and simple message to the Ukrainian people: the UK is with you and we will be with you until you ultimately prevail.

“As Ukrainian soldiers fire UK missiles in defence of your nation’s sovereignty, they do so also in defence of the very freedoms we take for granted.

“That is why I have offered President Zelensky a major new military training programme that could change the equation of this war – harnessing that most powerful of forces, the Ukrainian determination to win.”

Andriy Yermak, head of the Office of the President of Ukraine, tweeted: “Today, together with Volodymyr Zelensky, the Office and Government team, we met with our good friend and ally, Boris Johnson.

Admiral Sir Tony Radakin, the head of the UK armed forces, said this week that Vladimir Putin's war was a "dreadful mistake" and Russia "will never take control of Ukraine ".

"Russia has strategically lost already. NATO is stronger, Finland and Sweden are looking to join," he said.

Earlier today, the PM pulled out of a speaking engagement in Doncaster, where northern Tory MPs were gathering, without explanation, just days before two crunch by-elections for the party.

The visit came a day after Mr Zelensky was visited by French President Emmanuel Macron, Germany’s Olaf Scholz and Italy’s Mario Draghi as Ukraine makes a bid to join the EU.

That has become a protracted battle and Mr Zelensky has been pressing allies to supply further, and more sophisticated, weaponry.

Previous : ‘The Only Way Is Ethics: Who will advise Boris Johnson now?’ – Fleet Street Fox
Next : ‘Brilliant’ doctor takes his own life after months of treating Covid patients