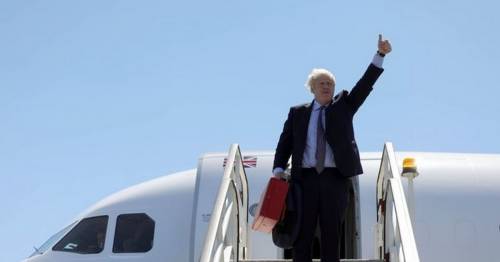 The Prime Minister gave a thumbs up as he posed for photographs on the steps of his private jet, after landing at Newquay airport – around 400km from London.

Mr Johnson made the 35-minute journey on 200-seat chartered Airbus A321.

According to Business Insider’s analysis of Government data, the trip produced 97.5kg of greenhouse gases per passenger – more than five times as many as if he’d taken the train.

The G7 Summit’s website outlines among the aims of the UK’s presidency, “tackling climate change and preserving the planet’s biodiversity” and “protect[ing] the future of our planet by moving to net zero and providing financial support for developing countries to do the same."

And in a tweet – accompanied by a picture of him on the jet – Mr Johnson said the conference would be aimed at "building back better, fairer and greener."

And yesterday, the Government said it would throw its weight behind plans to make Cornwall the “first net zero region in the UK”.

He said: “There’s no trainline from Cornwall to Washington or Tokyo but there is to London.

“The Prime Minister should have taken the train not got a plane.”

Upon his arrival in Newquay, the Prime Minister defended his mode of transport.

He said: “If you attack my arrival by plane, I respectfully point out the UK is actually in the lead in developing sustainable aviation fuel, and one of the points in the 10 point plan of our green industrial revolution, is to get to 'jet zero' as well."

Lib Dem climate spokeswoman Wera Hobhouse said: “At a global summit with climate change at the forefront of the agenda and with the UK hosting a climate change conference in the autumn the Prime Minister's choice to fly to Cornwall from London is laughably out of touch.

"The planet simply cannot afford for the Prime Minister to use a private jet to do a journey most of us would be happy to do by train.

"If the Prime Minister was serious about tackling climate change he would leave the jet at home, rather than trying to emulate President Biden.

“Liberal Democrats call on the Tories to encourage more people to travel sustainably.”