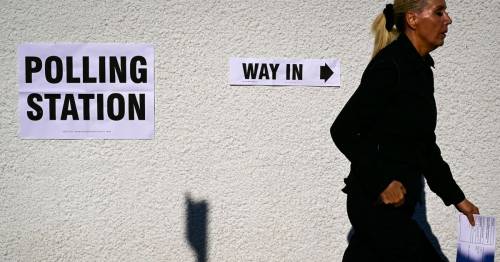 Voters are heading to the polls today for a pair of crunch by-elections which could rock Boris Johnson's premiership.

Contests are being held in Wakefield, West Yorkshire, and the Devon seat of Tiverton and Honiton to replace two disgraced Tory MPs.

The Prime Minister is at risk of losing both seats – the first time a Government has suffered a double by-election blow in more than 30 years.

A dire night at the polls would heap pressure on Mr Johnson from Tory MPs who kept him in place in a recent vote of no confidence – partly due to his record as an election winner in 2019.

The PM has been notably absent on the campaign trail and he will miss the immediate fallout after flying thousands of miles to Rwanda for a diplomatic summit.

Boris Johnson and his wife Carrie Johnson arrive in Kigali, Rwanda ahead of the Commonwealth heads of government meeting
(

Labour is tipped for victory in Wakefield, a constituency in its former heartlands which turned blue in 2019 for the first time in decades.

Labour candidate Simon Lightwood needs a 3.8% swing to win Wakefield, where voters are choosing a replacement to Imran Ahmad Khan who resigned after being found guilty of sexually assaulting a teenage boy.

The Tories are facing a Liberal Democrat challenge in Tiverton and Honiton, where ex-Army Major Richard Foord has a Conservative majority of 24,239 to overturn to win it for the Lib Dems.

Results are expected from both contests in the early hours of Friday morning.

People head to the polls at Lightwaves Leisure Centre in Wakefield, West Yorkshire
(

No sitting Prime Minister has lost two by-elections in a single day for more than 30 years.

John Major's Tory Government suffered a double blow at the polls on November 7 1991, when it lost Langbaurgh in Cleveland to Labour and also Kincardine & Deeside in east Scotland to the Liberal Democrats.

Polling guru Professor Sir John Curtice warned that Mr Johnson is facing "increased antipathy" from voters and said a pair of defeats would show the Government "is at risk of losing its electoral footing".

Writing in the Independent, he said: "As Lady Bracknell might observe, for the Conservatives to lose one by-election on Thursday might be regarded as unfortunate.

"However, to lose two might look like much more than carelessness – but a sign of a government that is at risk of losing its electoral footing."

Keir Starmer said last night: “The public is fed up of Boris Johnson and a Conservative Party that promises big but never delivers."

He added: "A vote for anyone other than Labour will let Boris Johnson off the hook.

"The people of Wakefield have a chance to send a message to the Tories that enough is enough.”

Liberal Democrat Leader Ed Davey said his party was "neck and neck" with the Tories in Tiverton.

“More and more people in Tiverton and Honiton are backing the Liberal Democrats because they are fed up of Boris Johnson’s lies and neglect," he said.

Previous : Family say ‘our hearts are broken forever’ as mum-of-three dies aged just 28
Next : Boris Johnson says it would be ‘crazy’ for him to quit even if he LOSES crunch by-elections