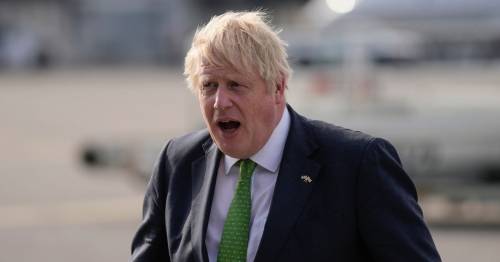 Boris Johnson is spending the weekend deciding whether to detonate a key part of his Brexit deal – sparking a potential trade war with Brussels.

The Prime Minister, who is at his country retreat Chequers, could unveil legislation to override parts of the agreement he struck – effectively tearing up the Northern Ireland Protocol which prevents a hard border with the Republic.

The province was plunged into deeper political turmoil today as the Democratic Unionist Party blocked the election of a new Speaker at the Stormont Assembly – leaving it unable to function.

DUP leader Sir Jeffrey Donaldson claimed: "I believe that we need to send a very clear message to the European Union and to our Government that we are serious about getting this Protocol sorted out.

"Because of the harm it is doing – undermining political stability, damaging the agreements that have formed the basis of political progress made in Northern Ireland, to our economy, contributing to the cost-of-living crisis – this matter needs to be dealt with.

"While others sit on their hands, we are not prepared to do that. We need decisive action taken by the Government."

Blasting the decision, Irish leader Micheal Martin said: "Yes there are issues that unionism has raised with us in respect of the Protocol, but those issues should not prevent the establishment of the Assembly and convening of the Assembly and the formation of the Executive."

Downing Street also hit out at the move.

A No10 spokesman said: “Parties should come together to form an Executive to provide the people of Northern Ireland with the stable government they deserve.”

The UK is thought to be drawing up plans for legislation to scrap checks on goods flowing from Great Britain to Northern Ireland, which has effectively stayed in the EU’s single market for goods.

The PM could deliver a speech in the coming days calling on Brussels to help overhaul the Protocol.

Talks between London and Brussels could continue while the plan made its way through Parliament.

Critics say the Protocol has drawn a frontier down the Irish Sea, hampering trade within the UK.

But supporters believe the mechanism is key to preventing a hard border on the province’s 310-mile frontier with the Republic – the UK's only land boundary with the EU.

Mr Johnson said the situation is “now very serious”, but stressed the Government was committed to the 1998 Good Friday Agreement peace deal.

Brexit Opportunities Minister Jacob Rees-Mogg accused the EU of trying to punish the UK for Brexit.

"I think it wants to make the UK feel bad about having left the European Union and that underpins its whole policy and it doesn't really mind about the consequences of that,” he claimed.

"We just have to get on with life and recognise that we have left.

“We have to make our own way. We are an independent country, and what the EU wants and thinks is secondary.”

Asked about the implications of the UK Government taking unilateral action on the Protocol, Ireland's foreign affairs minister Simon Coveney warned: "People across the United Kingdom need to understand what that means – it means that your Government is deliberately deciding to breach international law, which is something that every former Prime Minister still alive in Britain has warned against.”

Previous : Shooting at Koreatown salon in Dallas could be linked to string of shootings at Asian businesses: Police
Next : Tory chairman denies mocking Partygate after donating champagne signed by Boris Johnson