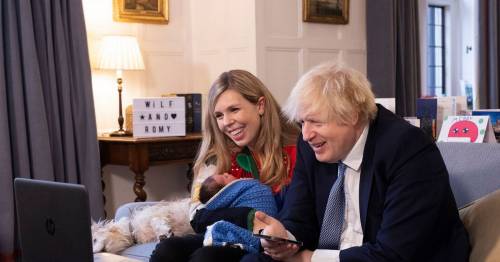 Boris Johnson's baby daughter was 'quite badly hit' by Covid after contracting the virus at just five weeks old, it has been reported.

Last week, Downing Street said that a member of the Prime Minister's family had tested positive for the virus, but did not reveal who the relative was.

But last night, it was claimed that it was the Prime Minister's now six-week-old daughter Romy, according to the Daily Mail.

A source told the publication she had allegedly suffered 'quite badly' but was now 'on the mend'.

Mr Johnson did not appear in public for several days after the Downing Street announcement while he self-isolated.

The 57-year-old himself came close to dying from the virus in the early weeks of the pandemic.

He reappeared on Tuesday when he gave an interview to Sky News about the No10 lockdown party revelations engulfing the Government.

A Downing Street spokesman refused to comment when contacted by the Mirror.

The news comes after Mr Johnson managed to ­cling to power after Tory bigwig David Davis demanded he quit.

And the PM faces a wait to see if MPs trigger a vote to oust him, as Red Wall MP Christian Wakeford defected to Labour.

He was quoting a plea to Tory PM Neville Chamberlain in 1940.

Mr Johnson's crumbling authority was dealt a crushing blow on Wednesday with a Red Wall defection and yet more calls to quit over Partygate.

And as the PM faced an anxious wait to see whether MPs trigger a vote of no confidence in him, Tory heavyweight David Davis was among those demanding his head.

One senior Tory warned Mr Johnson’s position was now “in the balance”.

A report into the lockdown parties – which is being investigated by top civil servant Sue Gray – will not be published until next week.

Mr Johnson announced on Wednesday that a large portion of the plan B restrictions will be scrapped in England on January 26.