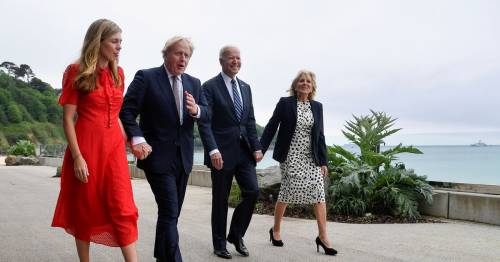 Boris Johnson and wife Carrie host a G7 beach barbecue on Saturday – with world leaders expected to toast marshmallows on a fire pit.

In scenes more likely to take place at Glastonbury, a post-A-levels' camping trip or a Scouts' jamboree, the globe's most powerful figures will gather round to eat flame-grilled fare and listen to Cornish sea shanties.

The unusual and potentially boozy bash, which appears to have been heavily shaped by 33-year-old Mrs Johnson, could be seen as a second wedding celebration for the Prime Minister and his new bride. Providing the entertainment for tomorrow evening's sunset party will be Du Hag Owr, who describe themselves as “Cornwall's South Coast Shantymen”.

And in a nod to British traditionalism, the RAF's Aerobatic Team – the Red Arrows – will roar into the sky trailing white, red and blue smoke to pull off a string of spectacular Top Gun stunts.

What's on the menu?

Leaders will enjoy a beach barbecue cooked by chef Simon Stallard from the Hidden Hut in Portscatho.