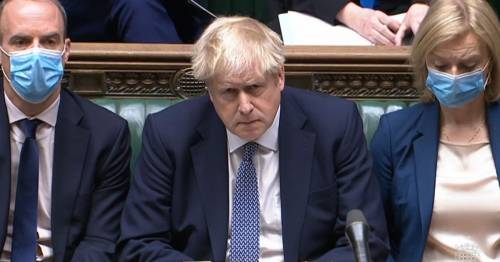 Boris Johnson has apologised for the Downing Street lockdown garden party – and finally admitted that he was present at the event.

The Prime Minister told MPs that he “went outside for 25 mins" to thank staff but admitted "with hindsight I should have sent them back indoors".

Labour leader Keir Starmer branded his defence "ridiculous" and demanded to know if the PM would resign.

And it appeared the PM had not won over his critics, with Tory peer Ruth Davidson saying "I'm not convinced today drew a line under anything".

Campaigners for bereaved families said the PM's "lies have finally caught up with him" – and he must resign.

The Prime Minister is battling for his political life after a wave of outrage at the latest revelations about parties in Downing Street when the country was living under Covid curbs.

A leaked email from the PM's principal private secretary, published by ITV on Monday, showed No 10 staff were invited to "make the most of the lovely weather" with a garden party on May 20 2020.

Gatherings were banned in England at the time under Covid restrictions.

Tory MPs sat silently, with many sitting with arms folded and looking to the ceiling when Mr Johnson began speaking ahead of Prime Minister's Questions.

In a statement ahead of the PMQs clash, Mr Johnson said: "I want to apologise. I know that millions of people across this country have made extraordinary sacrifices over the last 18 months.

"I know the anguish they have been through – unable to mourn their relatives, unable to live their lives as they want or to do the things they love."

He added: "I know the rage they feel with me and with the Government I lead when they think in Downing Street itself the rules are not being properly followed by the people who make the rules."

Mr Johnson said he went into the garden for a short while but he should have sent everyone back inside.

"I should have recognised that even if it could be said technically to fall within the guidance, there are millions and millions of people who simply would not see it that way, people who have suffered terribly, people who were forbidden for meeting loved ones at all inside or outside, and to them and to this House I offer my heartfelt apologies.

"All I ask is that Sue Gray be allowed to complete her inquiry into that day and several others so that the full facts can be established."

When the PM said he regretted that “people in Downing Street were not following those rules”, several opposition MPs shouted: “You!!”

But Mr Starmer said he should do the "decent thing and resign".

Labour leader Keir Starmer called on the PM to resign

He said: "There we have it. After months of deceit and deception, the pathetic spectacle of a man who has run out of road. His defence … that he didn't realise he was at a party is so ridiculous that it's actually offensive to the British public.

"He's finally been forced to admit what everyone knew, that when the whole country was locked down he was hosting boozing parties in Downing Street. Is he now going to do the decent thing and resign?"

Mr Johnson said he took responsibility for what happened and he had apologised for it.

But the Labour leader hit back, demanding to know why he hadn't resigned when others had been forced to quit for breaking the rules.

"Why does the Prime Minister still think that the rules don't apply to him?"

The PM replied: "That's not what I've said and I understand the point that he makes, as I've said I regret the way things happened on the evening in question and I apologise."

Mr Starmer said his apology was "pretty worthless" and referred to DUP MP Jim Shannon's tearful speech in Parliament yesterday when he described how his mother-in-law died alone.

"He was following the rules whilst the Prime Minister was partying in Downing Street," Mr Starmer said.

"Is the Prime Minister really so contemptuous of the British public that he thinks he can just ride this out?"

SNP Westminster leader Ian Blackford also blasted the PM for having "no sense of shame" and said he should go.

"The public overwhelmingly think that the Prime Minister should resign," he said.

"Trust has been lost and the public will not forgive or forget. If the Prime Minister has no sense of shame, then the Tory backbenchers must act to remove him."

Angry Tories had branded the situation "indefensible", with the Scottish Tory leader Douglas Ross saying the PM "should resign" if he misled Parliament when said no rules were broken.

Chancellor Rishi Sunak was conveniently absent from proceedings after travelling to Devon for a visit – more than four hours by car from Parliament.

They sat motionless as the PM and Mr Starmer spoke, apart from Dominic Raab shaking his head when Mr Starmer said the PM was at many parties.

Boris Johnson shook his head as Keir Starmer said he had offered “ridiculous denials” knowing they were untrue.

Downing Street stonewalled questions on the garden party – despite the PM admitting he attended it for 25 minutes.

The Prime Minister’s Press Secretary refused to deny Mr Johnson drank at, made a speech at, or brought a bottle to a ‘BYOB’ bash on 20 May 2020.

She also refused to rule out him resigning, saying: “It is a hypothetical question that seeks to pre-empt the findings of the report.”

She did deny Mr Johnson was a liar, telling journalists: “No”.

The defence appeared to have done little to reassure some angry Tories.

Baroness Davidson, a former Scottish Tory leader, tweeted: "I'm not convinced today drew a line under anything either."

Hannah Brady, spokesperson for Covid-19 Bereaved Families for Justice, said "The Prime Minister's lies have finally caught up with him.

"Not content with kicking bereaved families like mine in the teeth by breaking the rules he set and then lying to us about it, he's now taking the British public for fools by pretending he ‘didn’t know it was a party’.

"Every time he lies to us, he pours more salt into the wounds of those who have already lost so much to this pandemic, but that doesn’t stop him. He’s incapable of telling the truth and he needs to go."