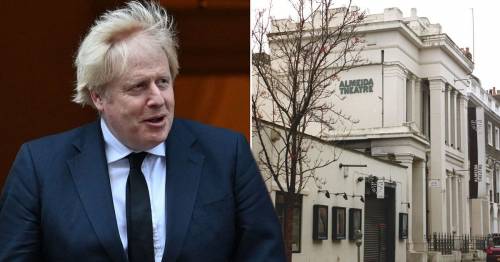 Boris Johnson has been accused of ignoring mask-wearing rules AGAIN – this time at a crowded theatre.

Witnesses saw the Prime Minister failing to cover up throughout the first half of a production of Macbeth on Tuesday night – and at the bar in the interval.

He had his mask round his chin during the first half, and off completely during the second half – before then putting it on when the house lights came on at the end, sources told The Guardian.

The website of the Almeida Theatre in Islington, near the £3.75m townhouse sold after his divorce, tells punters: “Face coverings are no longer required by law. However, the government still recommends that people continue to wear face coverings in crowded, enclosed spaces.

“For this reason and to help protect our staff, cast and other audience members, we ask all our visitors to continue to wear a face covering while in the theatre, unless exempt or when eating or drinking.”

Audience member Ollie Norton-Smith tweeted a photo of the Prime Minister, writing: “Unfortunately this audience member sat in front of me took his mask off when the lights went down and kept talking to the person next to them.

“It takes a special arrogance and ignorance to disregard simple rules to keep people safe.”

He also claimed: “Weirdly, he also kept growling whenever the witches were onstage and kept asking when they were going to do the ‘skull speech’”.

Matt Fowler, co-founder of Covid-19 Bereaved Families for Justice said: "It truly beggars belief he is ignoring his own Government’s advice.

“When will the PM learn that he sets the example that people across our country will follow?

It comes days after the Prime Minister apologised for going mask-free for “barely 30 seconds” at a hospital, which had told him three times to wear one.

The Mirror also revealed the PM went without a mask on a crowded train earlier this week. And he defended going mask-free next to 95-year-old Sir David Attenborough at the COP26 climate summit.

The PM’s Press Secretary today refused to deny he had ditched his mask in the theatre – but bizarrely claimed: “The Prime Minister follows all Covid rules."

Told he does not, in fact, do that, because he apologised for not wearing a mask in a hospital, she replied: “On the hospital, you heard his comments on that at liaison committee last week.

The Guardian saw a photo of the Prime Minister in the theatre, with someone believed to be a family member, at what has been described as a sold-out run of the play.

The PM went mask-free next to Sir David Attenborough
(

According to the newspaper, there was also an announcement about mask-wearing, signs up around the building requesting it, and an e-mail to attendees saying: “Remember to wear a face covering at all times throughout the building unless you are exempt.”

Shakespeare’s Macbeth is a play about a king who is murdered by an ambitious lord and his conniving wife, only to be overthrown by warring factions.

Some Tory MPs have reportedly written no confidence letters in the PM, who swept to power after MPs kicked out Theresa May in 2019.

No10 declined to comment on whether Boris Johnson learned anything from the play.

Previous : Montgomery faces fine lawsuit for dropping Confederate name
Next : ‘Outpourings of regret over migrant tragedy not enough, France and UK must find solution’ – Voice of the Mirror