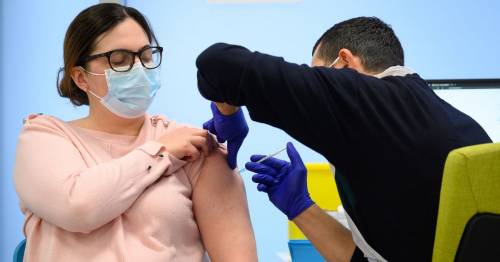 Covid booster vaccines could be offered to all adults in the UK, the Health Secretary has said.

Sajid Javid said the Joint Committee on Vaccination and Immunisation (JCVI) are continuing to look at whether healthy adults aged 18 to 39 should be offered a third jab.

“That’s a decision that we will make with the help of our experts,” he told the BBC.

It comes despite Prof Sir Andrew Pollard, of the Oxford Vaccine Group, suggesting the doses should go to the developing world first.

The expert told the Andrew Marr Show: “Well, if your phone today was at about 75% charged and mine was at 5% I think it would be easy to work out who should get the phone charger.

"It should be me. And of course that’s where we are today. We’ve got around about 75% of the whole population here in the UK vaccinated.

"In low income countries we’re still at 5%. So we really do need to get doses to those populations.”

The booster has already been extended to those over 40 and younger people in at-risk groups.

Children aged 16 and 17 can also get a second dose, while those aged 12 to 15 are advised to get one dose. There is currently no official work on offering the jab to under-12s, Mr Javid said, despite reports suggesting it’s been looked at.

The National Booking Service will open up to people aged 40-49 tomorrow to get their third dose of vaccine, and to 16-17-year-olds for their second doses.

People can book a third booster dose as soon as six months have passed since their second dose.

Around 15 million boosters have been administered in the UK.

Vaccines give high levels of protection but immunity reduces over time, particularly for older adults and at-risk groups.

Ministers are urging people to come forward to get extra protection over the winter months.

While healthy under-40s are not being offered a booster for now, the JCVI watchdog will make a decision on this when more data is available.

“At present, it is not known whether recurrent boosters will be required in the long term, and more data is required to inform these decisions as we move into 2022.”

Mr Javid told Times Radio: “They are looking down to the age of 18. We've already asked them about that and we're public about that.

“And they've actually said in their recent advice that's something that they would want to do in any case, to 18 and above.”

He could not give a timescale for a decision.

Currently, Covid-19 vaccines are licensed in the UK only for children aged 12 and over.

But the Sun newspaper reported leaked proposals which it said showed that health bosses are preparing to jab children aged between five and 11 next spring.

Asked if vaccines for this age group would be a step too far, Mr Javid told Times Radio: "It's not for me to say, I think that would be inappropriate.

“I really want to make sure whatever decisions we make on vaccines, that we're getting the very best expert advice."

Professor Sir Andrew Pollard, director of the Oxford Vaccine Group, said there is already "quite a lot of immunity building" in younger age groups when asked about coronavirus vaccines for the youngest children.

He told the Andrew Marr Show: "We are seeing lots of transmission already has happened in younger children, as well as in teenagers, and so we have quite a lot of immunity building in those age groups from infection."

The Medicines and Healthcare products Regulatory Agency (MHRA) has said "expected standards of safety, quality and effectiveness" must be met before vaccines would be authorised for children aged 5-11.

If the MHRA extended the licence for younger children, the Government would consider recommendations from the JCVI before any rollout.