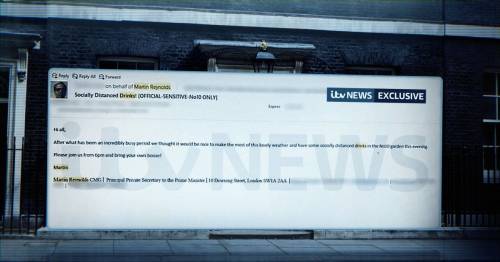 A bombshell email emerged tonight showing more than 100 No10 staff were invited to a ‘bring your own booze’ drinks party in the first lockdown.

The message suggested they should "make the most of the lovely weather" – even though the rest of the country was banned from meeting more than one person outdoors.

Witnesses said about 40 staff attended on 20 May 2020, including Boris Johnson and his wife Carrie – and there were long tables laden with drink, crisps, sausage rolls and other picnic food.

Outdoor gatherings were banned in England at the time under Covid rules.

Boris Johnson ’s Principal Private Secretary Martin Reynolds faces a fight for his job after the May 2020 email was revealed by ITV News.

And sources now expect Whitehall's parties investigator Sue Gray will have to interview the Prime Minister himself – as he was said to have been present at four of the events she is looking into.

Martin Reynolds, Principal Private Secretary to the PM, faces a fight for his job
(

Earlier today, Boris Johnson repeatedly refused to deny he attended the gathering, which is being investigated by standards chief Sue Gray.

Now ITV News has obtained a screenshot of the email invitation – and reported it went to more than 100 No10 employees, including the Prime Minister's advisors, speechwriters and door staff.

The email represents the first evidence of the social gathering on May 20, 2020, first revealed by ex-No 10 aide Dominic Cummings on Friday.

In the email marked 'official sensitive, No10 only', Mr Reynolds wrote: "Hi all, after what has been an incredibly busy period it would be nice to make the most of the lovely weather and have some socially distanced drinks in the No10 garden this evening.

Less than an hour before the gathering, Cabinet Minister Oliver Dowden told the public at the daily No 10 briefing to stick to meeting in pairs outdoors despite the sunshine.

The May 20 gathering was revealed last week by ex-Downing Street aide Dominic Cummings , who has gone to war with his former boss since leaving Government in November 2020.

The e-mail obtained by ITV News
(

Hannah Brady, spokesperson for Covid 19 Bereaved Families for Justice, said: "My Dad died just four days before this email was sent out, he was only 55 and was a fit and healthy key worker.”

She added: “How can those running the country have thought it was OK? Could there be a more disgraceful example of 'one rule for them, and another rule for the rest of us'?

“To make matters worse, in September last year I sat in that same Garden, looked the Prime Minister in the eyes and told him how my dad had died.

“He told me he had ‘done everything he could’ to protect my Dad, knowing that he had partied in that same spot the very day that Dad’s death certificate was signed.

“It makes me feel sick to think about it.”

Angela Rayner, Deputy Leader of the Labour Party, said: "Boris Johnson has consistently shown that he has no regard for the rules he puts in place for the rest of us.

"He is trying to get officials to take the fall for his own mistakes, but he sets the tone for the way Downing Street and the rest of government operates.

"At the time this party took place, key workers on the frontline were working round the clock to keep us all safe, people suffered loneliness and loss in unimaginably tough circumstances and for the majority of the country our freedom was limited to a daily walk.

"Labour has welcomed Sue Gray's inquiry, but we need confirmation that this latest revelation, and any other parties not yet revealed by press investigations, will be covered by her probe."

Whitehall enforcer Ms Gray is leading the probe into a series of rule-busting parties in No 10 and across Government after explosive revelations first reported by the Daily Mirror.

Boris Johnson and Carrie Johnson in the garden of 10 Downing Street after their wedding, in 2021
(

The May 20 gathering is separate from one on May 15, 2020, of which a photo showed Mr Johnson and his wife sitting with No 10 staff on the terrace with a bottle of wine and cheese.

Asked on Monday if he and his wife Carrie attended the May 20 event, Mr Johnson repeatedly told reporters: "All that, as you know, is the subject of a proper investigation by Sue Gray."

Downing Street also refused to comment three times on whether the PM attended.

The Prime Minister's official spokesman said: “As I’ve made clear before there’s an independent process going on to look into this led by Sue Gray and I can’t comment further while that’s taking place.”

Ms Gray is investigating four events in 2020 which the PM is thought to have attended:

Cleo's leaving do, the festive No 10 quiz and the two garden parties

It comes hours after Downing Street denied Mr Reynolds would be moved to another post over the furore.

"The Prime Minister has full confidence in his team. There is no change in that post," the PM’s spokesman said.

But SNP Westminster Leader Ian Blackford MP said: "Boris Johnson must come clean and admit whether he attended, or was aware of, this covid rule-breaking party in his own back garden.

"People will find it utterly outrageous that while the rest of us were banned from public gatherings, the most powerful people in the Tory government were boozing up at No 10 Downing Street – proving yet again, that it's one rule for them and another for the rest of us.

"Boris Johnson's Tory government is the most corrupt in decades. If the Prime Minister had a shred of integrity or an ounce of shame, he would have resigned many months ago. He has no moral authority left, and as he won't go – his Tory MPs have a duty to remove him from power.”

Meanwhile, the PM will not face an investigation by Parliament's "sleaze" watchdog into the £112,000 refurbishment of his Downing Street flat, No 10 has confirmed.

Parliamentary Commissioner for Standards Kathryn Stone had faced calls to investigate whether the PM broke the rules for MPs.

His adviser on ministerial interests, Lord Geidt, revealed last week that Mr Johnson had failed to tell him about exchanges with a Tory donor who helped fund the revamp.

Previous : All the Covid rules as No10 staff held BYOB drinks – and what Tories were saying
Next : Biden changed his mind on the filibuster. It’s not enough.