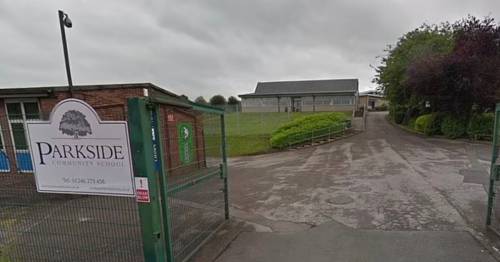 An army bomb squad rushed to a school that was evacuated after a pupil brought a hand grenade to a history class.

Children at Parkside Community School, in Chesterfield, Derbyshire, were ordered out of the building while police brought in an army explosives team to take a look at the grenade.

Skilled technicians from the bomb squad arrived at the scene and examined the grenade at around 11am on Wednesday.

It turned out to be only a scare fortunately as the grenade had been decommissioned.

It is believed that the grenade had been brought in by a Year 7 pupil.

After the bomb squad gave the all-clear, the children were allowed back into the school and carry on with their classes.

A police spokesperson said: “We were called at 11am today (Wednesday, October 13) by the school as a student had brought an old hand grenade into a history lesson.

"Part of the school was evacuated while the military EOD (Explosive Ordnance Disposal) team was contacted.

"The team attended and examined the item, confirming it had been decommissioned.”

Previous : Brothers who hunted down sibling and stabbed him to death through car window jailed
Next : Beirut violence is a setback but will be overcome – PM Mikati