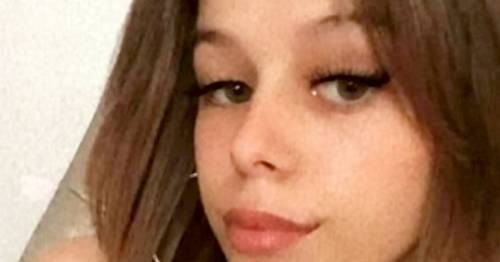 The devastated boyfriend of a missing teen is being comforted by her family today, it has been reported.

Louie Leach has been staying with Bobbi-Anne McLeod's mother and two siblings at their home in Plymouth, Devon as police continue to question two murder suspects.

Bobbi-Anne, 18, was reported missing on Saturday when she did not show up to meet Louie and a group of friends at 8pm.

Yesterday, a body was found close to the coastal path and car park above Bovisand beach – seven miles from the bus stop where the teen was last seen.

Devon and Cornwall Police are continuing to search the woodland and cliffs above a Devon beach for clues.

Police say that while formal identification hasn't been carried out but Bobbi-Anne's were informed and are being supported by specialist officers.

One of Bobbi-Anne's friends told the MailOnline : "Louie is with Bobbi-Anne's family now and they are helping each other through this difficult time. They can barely speak. There are no words for the horror they are living through.

"Bobbi-Anne and Louie were really in love and were a wonderful couple. They had their whole lives ahead of them and now this has been cruelly taken away from Louie and it's crushed him."

Flowers at the scene
(

Late last night brother, Lee, shared an image of the two of them as children and wrote: "Until we meet again sis. I love you. Now go rest easy."

Two men, aged 24 and 26, were arrested last night on suspicion of murder and remain in custody.

Today, mourners arrived to lay flowers opposite the bus stop where Bobbi-Anne was last seen in the Leigham area of Plymouth.

Many wept and hugged each other as forensic police officers were seen combing the surrounding area for clues.

The assistant chief constable of Devon and Cornwall Police Nikki Leaper said the two arrested suspects were still being questioned and they were not anticipating any charges to be brought today.

In a statement read out at a press conference, she said: "We are aware of the significant level of interest in the ongoing murder investigation being run by our major crime team and I wanted to provide you with the latest information in relation to this.

"The two men who were arrested on suspicion of murder remain in police custody at this time.

"We do not anticipate this to change throughout today as enquiries continue at a pace.

"Yesterday afternoon officers located the body of a woman in the Bovisand area of the South Hams after information received by police led to enquiries being carried out in the area.

"Formal identification hasn't been carried out but the family of 18-year-old Bobbi-Anne McLeod were informed of the development and they continue to be supported by specialist officers.

Two men have been arrested on suspicion of murder
(

"Officers on the ground have been and are continuing to be supported by specialist resources whilst extensive searches and forensic examination of a number of scenes is carried out.

"These searches are expected to continue into the coming days and the public can expect to see an increased visible police presence during that time. We apologise for any disruption these searches may cause to our communities.

"Whilst of course we understand the public interest in the investigation, we remind the public that this is a live and active case and we ask the public not to speculate at this time.

"I would like to thank the public and the communities of Plymouth for supporting our officers and investigation and I continue to encourage anyone with information which may assist our investigation to contact us."

Anyone with information that may assist the ongoing investigation is asked to contact police on 101 quoting log 706 22/11/21.