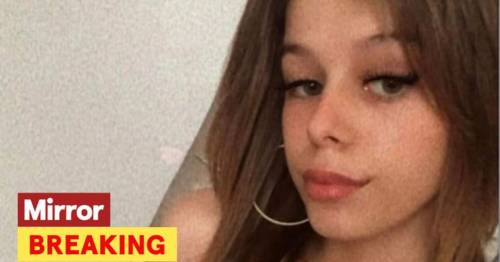 A body has been found in the search for a missing 18-year-old girl who was reported missing after failing to meet friends at the weekend.

Detectives investigating the disappearance of Bobbi-Anne McLeod have launched a murder investigation and arrested two men on suspicion of murder.

Bobbi-Anne was reported missing to police on Saturday after she failed to meet with friends in Plymouth.

Sadly, earlier today the body of a woman was located near Bovisand, South Hams during searches by police officers.

These searches were carried out following information received by police.

Formal identification has yet to be carried out but the family of Bobbi-Anne McLeod have been informed of this development and are being supported by investigators.

Bobbi-Anne's mobile phone was also handed into police, it is understood

Two men, aged 24 and 26 from Plymouth have been arrested on suspicion of murder and remain in police custody at this time.

Close friends of teenager earlier said they were growing increasingly concerned after police found what are believed to be the teenager's headphones and a pouch of baccy at a bus stop, which has since been sealed off by police.

Brother Lee McLeod earlier took to Facebook to appeal to people to come forward with any information.

"Police have rung and someone has handed in Bobbi's mobile," he said.

Close family friend, Amanda Issacs, 34, said the teenager had been on her way to meet her boyfriend when she disappeared three days ago.

The Facebook group set up to coordinate the search was told of the development by close family friend and admin Amanda.

She wrote: "It’s with absolute sadness I am posting this. Please respect family privacy at this time. R.I.P Bobbi we love you loads and always will."

Her posted prompted hundreds of tributes within minutes.

One local said: "What a cruel world we live in. Absolutely devastated for all her friends and family.

"Like most, I’ve followed this from the start of her going missing and I really hoped this wouldn’t be the outcome. Sleep tight you beautiful girl, I’m so sorry."

Another said: "Absolutely heartbreaking my thoughts are with all her family and friends and her poor boyfriend . There's simply no words that can help with the pain but please please hold on to everyone's love xxxxx"

Another said: "Soo sooo devastating I can’t believe. Absolutely beautiful and amazing girl. You will be loved forever bobs and missed beyond words can describe."

Another said: "Absolutely heartbreaking. So not the ending we were all praying for. My thoughts and prayers are with Bobbi's loved ones. R.I.P sweetheart."

Enquiries remain ongoing in relation to this matter and anyone with information which may assist the ongoing investigation is asked to contact police on 101 quoting log 706 22/11/21.