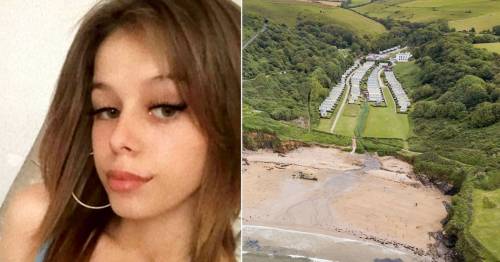 Bobbi-Anne McLeod: Beach 7 miles from home sealed off by police after body found

Police have sealed off a beach seven miles from where Bobbi-Anne McLeod went missing after the discovery of a body.

The 18-year-old was reported missing on Saturday, sparking a huge search by police officers and members of the community.

These efforts were called off on Tuesday after officers discovered a body near Bovisand, South Hams.

Police have blocked off a road leading to Bovisand Beach overnight, with police cars and ambulance crews pictured at the scene.

The beach is seven miles a road in Plymouth, where Bobbie-Anne was due to catch a bus before her disappearance.

She failed to meet her friends as scheduled and her family believe she never got on the bus as her ticket was not used.

Two men, aged 24 and 26, from Plymouth, have since been arrested on suspicion of murder.

A spokesman for Devon and Cornwall Police said: "Detectives investigating the disappearance of 18-year-old Bobbi-Anne McLeod have launched a murder investigation.

Bobbi-Anne was reported missing to police on Saturday 20 November after she failed to meet with friends in Plymouth.

Forensic officers carried out checks in Plymouth on Wednesday
(

"Police officers and staff have been engaged in enquiries with members of the public and completing searches since concerns for Bobbi-Anne were first reported.

"Sadly, earlier today the body of a woman was located near Bovisand, South Hams during searches by police officers. These searches were carried out following information received by police.

"Formal identification has yet to be carried out but the family of Bobbi-Anne McLeod have been informed of this development and are being supported by investigators.

Police carried out searches of the area after a tip-off
(

"Two men, aged 24 and 26 from Plymouth, have been arrested on suspicion of murder and remain in police custody at this time.

"Enquiries remain ongoing in relation to this matter and anyone with information which may assist the ongoing investigation is asked to contact police on 101 quoting log 706 22/11/21."

A GoFundMe page has been set up to help Bobbi-Anne's family give her 'the best send off', following the discovery of a body.

Floral tributes have been left at the Sheepstor Road bus stop
(

Bobbi-Anne's brother paid heartbreaking tribute to her on social media.

Late last night brother, Lee, shared an image of the two of them as children and wrote: "Until we meet again sis. I love you.

"You didn't deserve this, such a beautiful and talented girl and to have you as my little sister the adventure and journey we had been on will always be treasured.

Close friends of teenager previously said they were growing increasingly concerned after police found what are believed to be the teenager's headphones and a pouch of baccy at a bus stop, which has since been sealed off by police.

Previous : US COVID-19 infections rise as Americans prepare for Thanksgiving
Next : Millions of Brits don’t think personal actions will make a difference to climate change