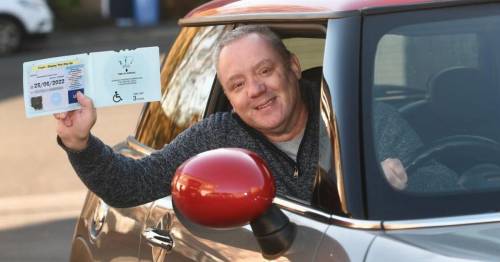 A man has won a two year battle against paying a ticket he was given for parking in a disabled zone, despite showing an enforcement officer his blue badge.

Garry White, 53, suffers from spinal stenosis, meaning he has trouble walking and has a disabled badge which should allow him to park in disabled spots.

But he said a parking officer issued him a £60 fine when he stopped in the Midland Way Retail Park in Radford for just 83 seconds in 2018, Nottinghamshire Live reports.

Mr White said he had left his car to read a nearby parking entrance sign, but as he turned around he was shocked to see a private parking enforcement officer writing him up a fine.

Garry White, 53, suffers from spinal stenosis, meaning he has trouble walking and has a disabled badge which should allow him to park in disabled spots.
(

He says he showed the parking enforcement officer his blue badge – confirming that he had the right to park in a disabled zone – before being told that he would still have to pay a fine.

Gary describes his condition like having arthritis in his back and he often has trouble walking.

Garry, who now lives in Ilkeston, said: "Basically I drove in and when I drove in I wasn't aware there was an entrance sign and that said 'private land' but obviously you can't stop as you're driving so I carried on driving and parked up.

"So I walked up to the sign, I'm disabled so I was a bit slow and methodical, and I walked over to the sign to read it, looked back and there was a guy ticketing my car.

"On a video from my dash-cam you can see it was 83 seconds between me leaving my car and them ticketing me.

"So I went back to the car with my blue badge in my hand – if you go to some places like Asda, if you just show them your badge they leave you alone.

"So I'm showing him my badge and he says that I would be going to CCJ [County Court Judgement] if I didn't pay it.

"Basically I just thought this is nonsense, got in my car and drove off.

"It was about a week later I got a letter through the post – this was in February 2018 and basically it just rumbled on from there.

"I've got my badge, I sent them a copy of it and they just wrote back saying 'appeal rejected. We know you have a badge but you should have displayed it'.

"The court case had to be delayed because I've had issues with my spine and I had to have a hip replacement."

The initial fine of £60 eventually reached more than £200 by the time Garry found himself in court.

A judge at Derby Combined Court Centre eventually dismissed the claims made by the private parking company, Vehicle Control Services, when Garry showed dash-cam footage of the incident that happened not far from the University of Nottingham.

Following months of delays the matter was finally resolved in the county court, where Garry was awarded £1,000 in costs and damages.

"Finally it went ahead about three weeks ago via video link on the computer," he said.

"I sent the court a link to this video that I uploaded on Youtube.

"It took the judge less than ten minutes to dismiss the claim."

He added: "It went on for two-and-a-half years, it was just ridiculous."

The Government's rules on Blue Badges states: "The Blue Badge scheme helps those with severe mobility problems who have difficulty using public transport to park close to where they need to go."

Vehicle Control Services have been approached for comment bu have not so far responded to requests.