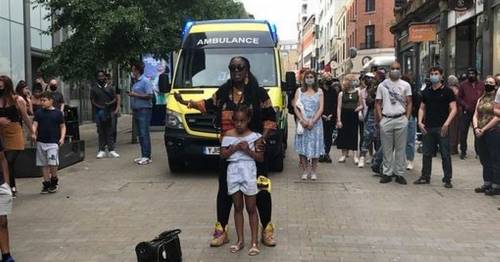 Black Lives Matter protesters have descended on Leeds city centre after a video emerged appearing to show a black man being pepper-sprayed as he was arrested.

The disturbing footage of three West Yorkshire Police officers first speaking to the man, who was sitting on a bench in Albion Street, before restraining him, has gone viral, reports LeedsLive.

It shows him wrestled to the ground after the spray is used before three more officers arrive to help haul him into a police van.

Cries of "my eyes!" can be heard from the man who repeatedly screams and wails in the dramatic video clip.

Onlookers demand to know why he is being arrested and are heard saying "this is outrageous" as the main cries in pain.

The incident has been labelled an example of "blatant police racism" and "police brutality" by organisers of tonight's demonstration, which started at 6pm at the same location.

A police spokesman said the man refused to give his details to officers who suspected him of being drunk and disorderly in the Trinity Centre. 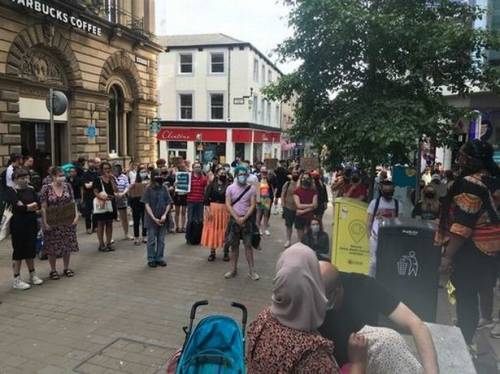 A witness to the arrest yesterday told a reporter she saw a man being "brutalised by police".

She then added: “When I say Black Lives Matter, why is that a debate?” 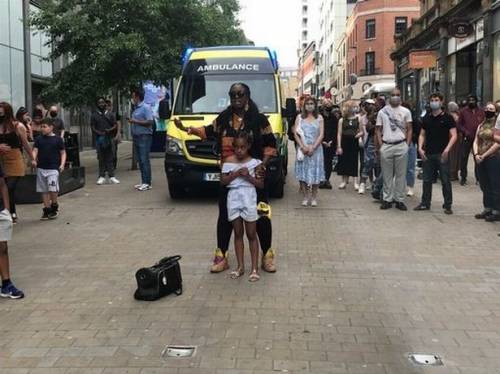 A mum, attending the protest with her daughter, addresses the demonstration
(Image: leeds-live WS)

Organiser Marvina Newton, speaking from the bench where the man was sat, asked everyone to socially distance by putting their hands out and making a circle for themselves during the protest.

She encouraged everyone to chant 'Black Lives Matter' and said after speeches she hopes for the demonstrators to march through the city's streets.

The protest was reportedly initially delayed because a woman fell ill on another bench, with an ambulance then called.

Earlier, in a social media post, BLM urged supporters to join them at the protest. 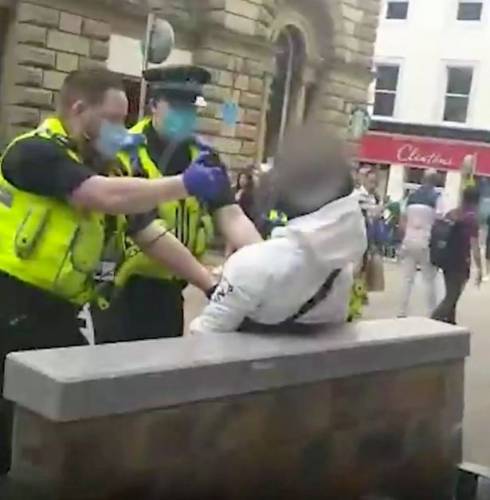 The black man was filmed as officers appear to spray him with pepper spray
(Image: leeds-live.co.uk)

A spokesperson for West Yorkshire Police said officers were forced to take action after the man had been seen acting aggressively, was removed twice from Trinity Leeds shopping centre by security staff and began drinking alcohol in breach of the Public Spaces Protection Order on Albion Street.

Officers were called to the scene at 5.46pm on Monday, and found the man on Albion Street. 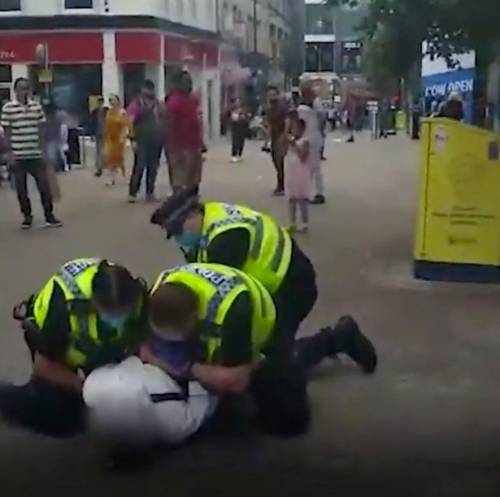 The officers then wrestle him to the ground
(Image: leeds-live.co.uk)

The force said officers spoke to him for more than eight minutes and attempted to establish his identity as a suspect for those offences, but he repeatedly refused to provide his details, which is an offence in these circumstances.

Then when officers tried to arrest him, he resisted, resulting in police using physical force and an 'incapacitant spray' to detain him.

The man was taken into custody on suspicion of being drunk and disorderly in a public place.

West Yorkshire Police have confirmed that he admitted guilt and accepted responsibility for his actions and has now been given a community resolution, dealing with the offences outside of formal court proceedings.

He received no injuries during his arrest or detention and was released from custody earlier this morning.

A referral has been made to West Yorkshire Police Professional Standards Directorate so that the circumstances can be formally reviewed.

Previous : Malin Andersson says being on Love Island drove her to get plastic surgery
Next : Oxford students vote to remove Queen portrait because she ‘represents colonial history’