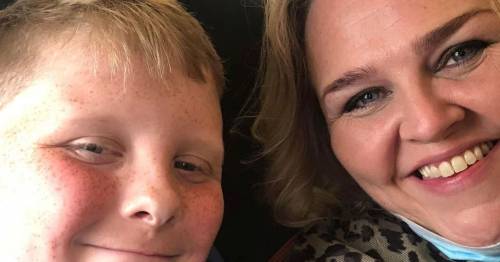 A 10-year-old boy was left with a "weeping" wound on his arm after his black henna tattoo became infected.

Lynne Humphreys' son suffered chemical burns after his mum bought him a dragon tattoo when they were on holiday in Turkey.

But 12 days later when it became lumpy and painful, the mum-of-two removed it hoping he'd got away relatively unscathed with just a 'light mark'.

However Caden had an allergic reaction to the black henna, which became infected and caused his skin to split and ooze yellow fluid.

Blisters even spread on his torso and even up to his chin.

The 42-year-old even feared Caden would contract sepsis but after three trips to the doctor, a course of antibiotics and two days off school.

The data processor is now keen to raise awareness of the severe reactions that the temporary body art can cause so no other child has to endure the same experience.

Photos captured by Lynne show the outline of the tattoo after she removed the henna and then it become increasingly red, 'angry' and raised.

Images show how his skin became scabby and cracked as a blotchy rash travelled up his body – leaving a red scar in the same pattern even after it healed.

Lynne, of Anglesey, north Wales, said: "A lot of my friends are going on holiday and that's why I posted it.

"They do them in Turkey, Egypt – everywhere. When I Googled them after we came home because of Caden's reaction, it wasn't until then that I realised how bad they [reactions] are.

"If I'd have known then what I know now, there's not a chance that I would have let him have it done.

"I just wanted to make sure that no other child gets it really.

"Even though two of the party had no side effects whatsoever, next time we go back they would never be allowed to have one, just in case.

"They say to do a skin test but even if we'd have done it, it wouldn't have shown up until we'd gone home anyway because it took days for it to come out.

"For me personally, it's a risk I wouldn't want to take."

Lynne said that Caden had a henna tattoo on the last day of their trip just before they flew home, just in case it was affected by the hot Turkish sun.

Lynne said: "The tattoo was applied and left for an hour before rinsing the rest of the henna off. All was fine and we flew home – he loved the tattoo and was showing his family and friends.

"It started itching and irritating him [12 days later] and you could feel bumps under it, so we removed it with make-up remover.

"We thought that was ok and that we'd gotten away with just a light mark but then it just started getting worse after that.

"His reacted really badly. It became inflamed, raised, quite hot and angry, and then went bad from there and got infected.

"He said it was hot and burning but it wasn't really painful until it started cracking and weeping."

Lynne initially went to the chemist but when it worsened visited the doctor where he was prescribed hydrocortisone cream.

She dashed Caden to the doctor again before school where he was prescribed stronger steroid cream and antibiotics.

But she collected him that afternoon as his arm was weeping through his clothes and aggravating him.

After returning to the doctors, she was advised to keep him home until it started to heal and dry out, and he returned back to school the following Monday.

He's now finished his course of antibiotics but they're still applying medicated cream.

Lynne said: "His rash went right up into his shoulder and he started getting little spots under his chin, down his back and down his arm.

"I was panicking a little bit. I thought he would have to have intravenous antibiotics because it was spreading quite quickly, the small spots were coming up as we were sat with him.

"They were little tiny blisters that were spreading from the infection.

"He started getting a bit worried and a bit emotional. I think he was worried that it was never going to stop.

"It was weeping yellow fluid. It wasn't very nice.

"When it started to spread I was worried it would turn into sepsis.

"I was really worried that it would get worse and worse but luckily I kept going to the doctors and they kept on top of it and if I had any problems to take him back straight away.

"The infection's gone but you can still see the scar on his arm now and we've been back for around a month."

Previous : M4 closed: Lorry carrying ‘pallets of wine’ goes up in flames on Prince of Wales bridge
Next : Young adults and children should get Covid booster jabs this autumn, vaccine chiefs warn