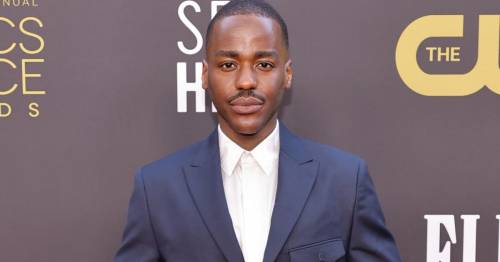 I have a confession to make. I’ve never seen a full episode of Doctor Who.

I know. Shoot me.

I watched bits and was fascinated by the Daleks as a kid, I know all about Tom Baker making the part his own, Peter Davison, David Tennant and all the rest of them.

I just could never get invested in the character or the show. A bit like Star Wars (but that’s a column for another day).

The thing is, the announcement of Ncuti (pronounced shoo-tee) Gatwa as the 14th Doctor is a reason to be cheerful.

Let’s not get caught up in the confected culture wars around this. Those who wish to divide us are describing his hiring as political correctness and box ticking.

They are banking on you frothing at the mouth over a TV show in which the eponymous hero is a time-travelling alien from the planet Gallifrey.

Well if the box to be ticked is that of a highly rated, talented actor, likely to draw new fans to the franchise, the BBC have done a good job.

Over the last 60 years, iconic British TV roles have been tailored to and played largely by just one demographic.

During the 1970s I remember shouting up the stairs to my brothers and sisters – and them doing likewise – when we’d see anyone who was Black on domestic TV, let alone actors in emblematic roles like Doctor Who. It was just so rare.

The parts they were handed were often negative – sidekicks or criminals, roles that reinforced harmful stereotypes or allowed more significant characters to use them as the butt of their racist jokes, as in period ‘hits’ Love Thy Neighbour and Till Death Us Do Part.

Shows with positive roles – like Desmond, The Kumars and The Real McCoy – had to be created for Black and Asian characters on niche channels like BBC2 and Channel 4.

Things have changed in the last decade or so with some major roles handed to actors who actually reflect the viewing audience.

Idris Elba has gone on to smash it as Luther, for example. Bend It Like Beckham star Parminder Nagra is doing a fine job as ITV’s DI Ray.

And yes, it is true to say that, according to Government statistics, just 3% of the UK is Black. But fewer and fewer people overall are watching terrestrial TV.

Commissioners are well aware, too, that a large number of younger viewers of all demographics have defected to Netflix and Amazon because they just don’t see many of the shows on terrestrial TV as an accurate reflection of the areas they grow up in and the schools they go to.

So Ncuti Gatwa matters. What his appointment represents matters. He also appears to be a blinking good actor. Gillian Anderson, his co-star on the hit show Sex Education, has described him as “a natural on camera”. Quite a few people are of the same opinion.

So far we have had 13 people play the Doctor in the show that had legacy fans hiding behind their sofa. Just one of them was a woman, Jodie Whittaker.

The fuss around her died down eventually and she did a fine job. The same will happen for Ncuti and one day we won’t even need to have this kind of conversation.

Previous : Dick Vitale to be honored with Jimmy V Award at 2022 ESPYS
Next : First Nations emergency professionals gather in Thunder Bay, Ont., ahead of wildfire season