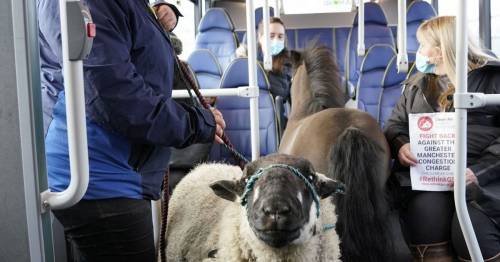 Young farmers brought their sheep and pony onto a bus to protest plans for a 'congestion charge'.

Shepherdess, Jade Hutchinson wanted to make a demonstration of how the proposed charge will affect her livestock business based in Bury, Greater Manchester.

Proposals for a daily charge of between £7 and £60 for vehicles with high-emitting levels of pollution in the region have been met with a tide of opposition, the M.E.N reported.

Jade, 22, says many livestock owners and farmers will see the cost of caring for their animals dramatically rise because of the Clean Air Zone (CAZ).

"The event was to create awareness of the impact the CAZ will cause, not only to the public and businesses, but the animals that rely on it.

Jade and Colin waiting for the bus
(

"The vehicles that do not comply are widely used by farmers, animal shelters, equestrians and so on. They're required to tend to the animals, feed them, check them and take them to the vets.

"The CAZ will devastate non-profit organisations that rely on these vehicles."

Jade added: "There are approximately 32 yards, farms and small holdings within a five-mile radius of Bradley Fold, where I demonstrated. Each one will be affected.

"They may not be big farms, but they still mean so much to our country behind the scenes."

The CAZ has been met with wide opposition
(

Determined to show that for some businesses, the option to take public transport instead is not feasible, Jade climbed on board the Diamond Bus 471 service with Colin, her Derbyshire Gritstone sheep.

Learning of her plans, another protester of the CAZ joined with their Shetland pony, Ernie.

Diamond Bus North West provided a special running service which had been cleaned ready for the farm animals to come on board.

She added: "The demonstration proved our point as a separate bus was organised. It is not possible for businesses to turn to public transport."

The young shepherdess who has only just launched her start-up venture, said if imposed, the charges could force her to close.

Jade said: “I have to rely on transport to move animals around. I have to transport sheep from field to field and take them and bring them back from auction," Manchester World reported.

“I’ve got an up-and-coming business and the Clean Air Zone is going to mean having to get rid of the truck because I won’t be able to afford it. The charge of £70 per week is ridiculous.

“I would have to close down and sell everything.

“Going on the Facebook page I saw the stress caused by this matter but no-one was bringing the farming and animal aspect of it in at all."

The journey lasted just five minutes and was held near the animals' homes, so they were not distressed.