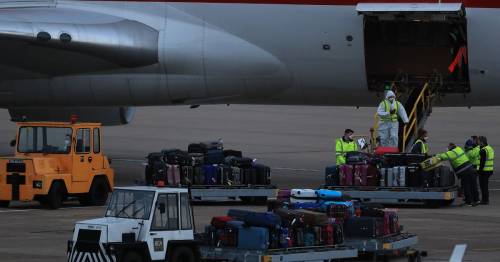 Frustrated passengers landing at Birmingham Airport say had to wait two hours to pick up their luggage.

It comes after weeks of long queues for both incoming and outgoing travellers, which have been blamed on a baggage handler shortages at the airport.

Today a number of passengers took to social media to complain about the delays at the luggage carousels. One man say he'd been told the wait could be almost three hours.

As reported on Birmingham Live, airport officials say that the lack of baggage handlers was due to many being "laid-off" during the pandemic and that more staff are currently being hired.

There have been weeks of long queues at the airport, much to the frustrations of travellers

One passenger, Raj, took to Twitter to vent his frustration. He posted: "@BHX_official, Just landed on the TUI flight from Cancun at 07:20am. Just been told after waiting 1hr 20 minutes that the baggage handler Swissport does not have enough staff to take our bags off and we would have to wait for another hour to get our bags!"

Fellow traveller Ricky @Ricky11782642 was in the same position. He tweeted: "@bhx_official How are you accepting flights into an airport where you have no staff to get luggage off the planes????? Absolute state of affairs and a mess of an airport."

While LMcKeown @KeownL posted: "@TUIUK @bhx_official Been told another hour wait for bags, so now it’s a 2 hour wait. Glad to see all the cabin crew get special treatment as their bags are off the plane and I guess they are on their way home now. Is that fair?"

Delays over the last few weeks have included long queues to get into the terminal, to check in and to get through security.

A spokesman for Birmingham Airport apologised to passengers at the baggage carousels. He said “ We’re sorry some arriving customers had very long waits for their bags this morning, this due to a shortage of ground-handling staff.

Birmingham Airport is in the process of hiring and training new staff, it said
(

“As an alternative to waiting, we offered to courier bags on to the homes of customers affected. Some took up this offer and we’re sorry to everyone affected.

“Like many parts of the aviation sector, our ground-handling teams are currently under-strength after colleagues had to be laid off during the pandemic. We are currently hiring in more staff who once trained and security-cleared, they will be deployed and service will improve.”

Meanwhile, chaotic scenes and huge delays have also been reported at Manchester Airport.

But this week passengers reported being forced to spend hours in queues which apparently reached as far as the carpark.

The situation was described as "absolute chaos" and "a shambles" travellers on Twitter.

@Rachael_Am4to Tweeted: "@manairport @AndyBurnhamGM #easyJet absolute disgrace my sister is in tears after missing her flight because of security. Begged security staff to fast track her thru as gate was closing no1 cares. Disgrace!!"

Around 550 new recruits have taken to the airport floor since January, and a further 500 new starters are currently going through the vetting process and security training.

Ian Costigan, interim managing director of Manchester Airport, said: "It is encouraging to see new staff joining us as a result of our ongoing recruitment drive, and we have seen security waiting times reduce in recent weeks.

"The last few weeks have been challenging but the team on the ground has done a great job in getting passengers through security more quickly, and I would like to thank all colleagues for their hard work and dedication."