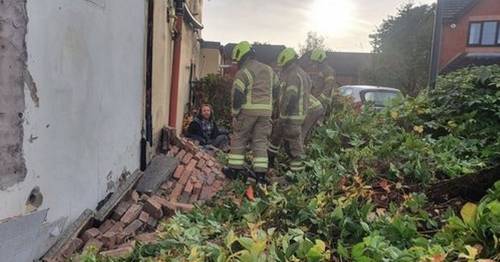 A bike helmet saved the life of a man after he became trapped under a pile of bricks when a 10ft wall collapsed on him.

Alan Bale, 42, said he screamed for help after the incident near his home in Pershore Road, Stirchley, Birmingham, at around 9am on Monday.

His leg was pinned beneath his bicycle until passers-by, paramedics and paramedics arrived to help him, Birmingham Live reports.

He was rushed to hospital, where doctors found he escaped with minor injuries.

Alan said he owes his life to his sturdy helmet, but after the incident, he became worried about what could have happened if the wall had come down on his two children.

Alan's legs were trapped underneath his bike
(

The incident took place in an "access corridor" for four terrace homes through which all residents have to pass to leave, Alan said.

The wall was previously part of a home but was left standing when developers demolished the property, he added.

The man, who has a four-year-old daughter and a 13-year-old son, said: "The thing that freaked me out is my child had been out the gate the evening before.

"I was lying there thinking it's just dumb luck that my child – who is like a stick – wasn't under that wall last night. He would have been crushed by the wall."

He said other residents could have been seriously injured or even killed by the collapsed wall.

Alan said he has been haunted by the thought that his son had been pushing his bike just where the wall collapsed the night before the incident.

He explained: "I was shaken by what happened. The wall had a large metal gate on it and was very high, 10ft tall, two layers. They demolished the house to create access and they left that wall standing.

"The wall has been gently leaning over for some years and on Monday morning it was leaning on the gate.

"I opened the gate which is a heavy metal gate, and it needed a bit of a shove because it was holding up the entire wall.

He has injuries on his hands and arms

"I opened the gate and walked through and within about five seconds the wall came down on me, trapping me between the wall of the house and the wall that was falling on my head.

"I stepped back against the house wall as far as I could and turned on my side. I had a bike helmet on, which probably saved my life as well.

"I was twisted up pretty badly and had bricks all over me. I pulled the bricks away from my hands and body as quickly as I could and called for help.

"Two passers-by came and pulled more bricks off me until I could breathe properly. Fire and ambulance turned up and continued so I could get my legs out.

Alan said he was saved by the helmet he was wearing

"My wife ran out into the street, she was really freaking out. I couldn't walk very well as my hip had been twisted, I managed to limp away."

In the hospital, doctors found he had injuries to his arms as well as bruises.

Alan said he is now struggling to move around and has pain, but is otherwise okay.

Alan's wife, Stephanie, praised quick-thinking neighbours who rushed over to help after hearing his calls to be rescued from beneath the bricks.

A 10ft wall collapsed on Alan

She explained: "As soon as it happened I couldn't get to him. I heard a noise it sounded like something blew over in the garden, then I heard Alan screaming. I went to the back gate and all I could see was a wall of brick. I had no idea how bad it was.

"Neighbours immediately jumped in to help and people we'd been engaging with through our community projects, we knew they were able to help with our daughter.

"We had a lot of people pull together for us which we're really grateful for."

West Midlands Ambulance Service confirmed paramedics were called to the street just before 9am.

A spokeswoman for the service said: “We were called at 8.58am to reports of a wall that had collapsed on Pershore Road, Birmingham. One ambulance, a paramedic officer a Hazardous Area Response Team paramedic and a BASICS doctor attended the scene.

"On arrival, we found one patient, a man, who was assessed at the scene and had sustained non-life threatening injuries. He was conveyed to Queen Elizabeth Hospital for further assessment.”