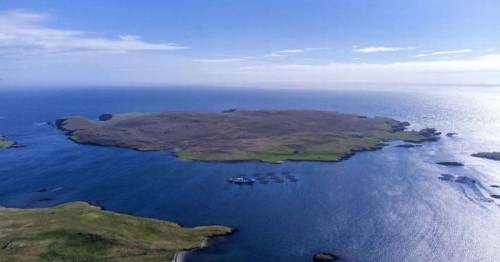 ‘Beautiful’ UK island on sale for £1.75m with a castle, flock of sheep and a 42ft whale

People looking to escape their busy city lives may want to consider buying their own island which comes with its own castle and the skeleton of a massive whale.

The Isle of Vaila in Scotland's Shetland archipelago is up for sale after its owners of the last 30 years have decided to sell up.

The island, which is about 10 minutes by boat away from the Shetland mainland, boasts 757 acres, 6.5miles of coastline and a bell tower overlooking the sea.

It also features the beautiful Vaila Hall – a 17th century six-bedroom castle described as "one of Shetland’s most eye-catching buildings".

The main bedroom hides a secret passageway leading to the tower bedroom, for those looking for the real castle experience.

Interested parties might have to check down the backs of the sofas as offers of more than £1.75million are being considered, according to the Daily Star.

The island's current owners, Richard Rowland and Dorota Rychlik, have lived there for close to 30 years after moving from London.

In this time, the couple lovingly restored Vaila Hall and married on the island.

The island amounts to a total of 757 acres
(

Mr Rowland told Shetland News : “We’ve had 30 fantastic years here, and we’re getting on in years now, so I think the time has come for someone else to take on the place

“One just has to be realistic that nothing is forever.”

Vaila also has a two bedroom cottage and a 19th century three-bedroom farmhouse that comes with a cowshed dubbed the "whale house" which houses the skeleton of a 42ft sperm whale which was beached on the island in 2000.

The inside of the restored Vaila Hall
(

The new owners wouldn’t be lonely as there is also a flock of 200 purebred Shetland ewes.

Luke French from estate agent Savills said: “The juxtaposition of the dramatic, elemental land and seascape with the exquisite craftsmanship of historic Vaila Hall makes for a quite extraordinary property.

“A rare prize indeed for the next owner but also one which benefits from practical forethought by the sellers with the shore base building providing ease of access and the farming enterprise, farmhouse and cottage creating a variety of opportunities.”

Last month it was reported people have the chance to move to a beautiful Scottish island – with £50,000 in their wallets.

The Scottish Government is offering the money to families and young people willing to move in a bid to reduce depopulation on the likes of Orkney and the Isle of Skye.

The £50,000 will be offered to 100 people until 2026 with a number of applications already received from as far away as South America.

Part of the National Islands Plan, it aims to boost resident numbers on the islands which are regularly voted the most beautiful in the world.

Alasdair Allan, the SNP MSP for the Western Isles, told the Times : “Depopulation is one of the biggest threats to our island communities.

“Anything we can do to reverse depopulation trends should be encouraged.”

Previous : Girl becomes a multi-millionaire at 11 after starting her own business aged FOUR
Next : TUI couple’s compensation plea after ‘babymoon’ trip ruined by 24-hour flight hell