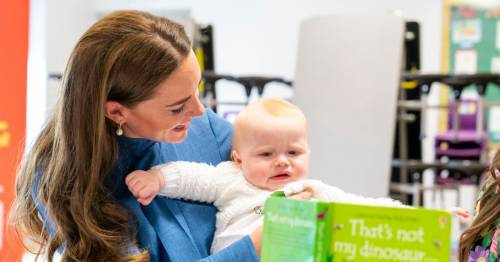 The Duchess of Cambridge looked delighted as she cooed over a baby on a visit to a Scottish primary school alongside Prince William.

William and Kate are on a two-day visit to Scotland with all of their engagements north of the border focusing on mental health.

After arriving in Scotland, they visited St John's Primary School in Port Glasgow, where they took part in a 'Roots of Empathy' session with little ones.

Kate, who looked chic in a blue blouse by Samantha Cameron's label Cefinn, played with 10-month-old Saul Molloy – and attempted to read him a book.

The mum-of-three is known for her love of babies and has made several remarks about how they make her feel broody – much to William's joking despair.

Meanwhile, she and William were also pictured sitting on the floor among the schoolchildren looking very animated as they played games with the youngsters.

Later today in Glasgow, they are also due to visit a project operated by The Wheatley Group and and see first hand how it is transforming the lives of vulnerable people and those at risk of homelessness.

The pair, who are known as the Earl and Countess of Strathearn in Scotland, will speak with service users who have benefitted from access to employment support to help mitigate the impact of poverty.

Kate seemed to be enjoying her visit to the school
(

Kate and William are on a two-day visit to Scotland
(

They will also visit a new-build property in the Kennishead area and hear about the importance of good-quality, secure housing. Homelessness has been an important aspect of William’s work.

Afterwards, the couple will visit Glasgow University where they will discuss mental health with staff and students.

They will hear about pioneering work being done by researchers at the school of Psychology and Neuroscience and both William and Kate will then meet members of the public outside of the university.

William and Kate meet some of the school pupils
(

The engagements will form part of a UK-wide tour for the couple to mark the Queen’s Platinum Jubilee this year.

Earlier this week, it was announced that they would also be visiting Wales over the Jubilee bank holiday weekend.

They are among senior royals who will tour the UK as the nation marks the Queen’s 70-year reign with a series of events.

The Earl and Countess of Wessex will visit Northern Ireland and the Princess Royal will visit Scotland with all the members of the monarchy attending public events marking the Platinum Jubilee.

The Prince of Wales and Duchess of Cornwall are likely to be in the capital attending events over the four-day weekend in June but it is not known which engagements the Duke and Duchess of Sussex will participate in.

During her Diamond Jubilee celebrated in 2012 the Queen and Duke of Edinburgh made an extensive tour of the country over a three-month period.

Previous : Gran’s rage at school where ‘kids sexually harass each other and racism is norm’
Next : Police told woman was killed in burglary – until her Fitbit data revealed truth