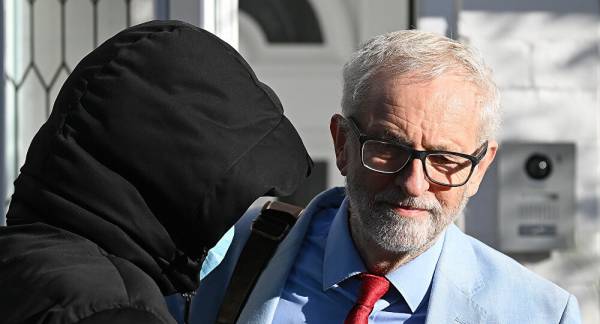 Former Labour leader Jeremy Corbyn received widespread support among young people in the United Kingdom, particularly after the 2017 general election. However, the Conservative victory in 2019 saw Corbyn’s resignation and accusations from detractors that his support was only ever significant among a small number of loyalists.

Famous panel show ‘Have I Got News For You’ is facing heavy criticism after one of its guests made a joke about  “bombing” Jeremy Corbyn supporters.

Comedian Fin Taylor, who took part in the long-running BBC comedy show on Friday night, alongside Labour’s Joan Bakewell, said in a comparison to musician Bob Dylan “only hates Corbyn so much because of his fans”.

“People who like Corbyn – what, it’s 200,000 people in the Labour party that are fanatics? So, all you’ve gotta do is, next year, bomb Glastonbury”, he said.

Fin Taylor has got #Glastonbury trending with this wild take from last night's Have I Got News For You! pic.twitter.com/pjbNgx801v

​Taylor’s comment did not go down well with many viewers, who argued that the it was “sad” and “unacceptable” to joke about murdering people.

For most it’s unacceptable to ‘joke’ about wanting to bomb an event where followers of a political party, faith or race you don’t like, gather. However, suggest bombing Glastonbury so as to kill 1000’s of young Corbyn supporters @BBC will feature you on Have I got news for you!

​Dawn Foster accused the comedian of “courting controversy cos no one’s heard of you”.

Joan Bakewell claims Corbyn “broke the law” on Have I Got News for You” & comedian Fin Taylor says he hates Corbyn supporters and would bomb 200,000 of them at Glastonbury, then “Ooh my week on Twitter will be fun.” Desperately sad, courting controversy cos no one’s heard of you.

​Another called the joke so “unfunny” that even the “Corbyn hating panel laughed”.

It’s one thing to hate a politician but to threaten to bomb 200,000 people for supporting a good man is not funny. If anyone said that about a Tory the right would lose their shit & it would be front page news.

​One user even accused “BBC officials and BBC lawyers” of endorsing the “killing hundreds of thousands of socialists”.

The production staff, parent company, BBC officials and BBC lawyers all saw an endorsement of killing hundreds of thousands of socialists and were a-ok with it being broadcast.

This is the reactionary culture of the BBC.

​Some, however, said that Fin Taylor doesn’t actually want to bomb Corbyn or Bob Dylan supporters and the show also heavily criticises the government.

Lads, I don’t think Fin Taylor actually wants to bomb Corbyn supporters. Or Bob Dylan fans for that matter. Or at least I hope not, otherwise I’m fucked too.

​Taylor’s comment referred to Corbyn’s appearance at Glastonbury Festival in 2017, where he delivered a highlight speech that was seen by tens of thousands of people.

The festival appearance came after the Labour Party under Corbyn’s leadership experienced a shock electoral success, taking away the Conservative’s parliamentary majority and coming 2,227 votes from forming a government.

Chanting his name to the tune of White Stripes’ “Seven Nation Army” became a staple from the summer of 2017 as his popularity surge among young people.

At #Glastonbury I spoke with thousands of people. Over 4 million have watched my speech online since. We're building a movement #ForTheMany. pic.twitter.com/s10U6yuTO8